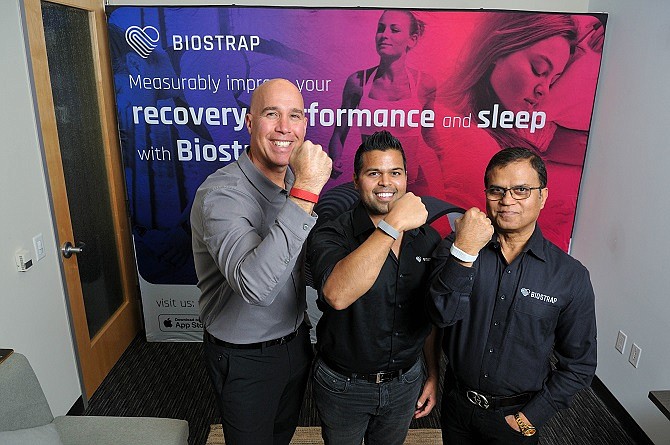 Software engineer Sameer Sontakey long had a dream of applying advanced data collection techniques to monitor the human body, then selling that data to health-conscious consumers.

Wearable devices such as Fitbit Inc.’s activity trackers provided body surface snapshots, but not the in-depth monitoring that could pass clinical muster and tell the user what was really going on inside their body.

So about five years ago, Sontakey and his father Dilip, an Indian immigrant and businessman, invested in technology developed by a company that used infrared sensors in wearable straps to track biometric data far beyond that reported by Fitbit or Apple Inc.’s Apple Watch.

That company was selling wearable monitors to clinical research institutions. The Sontakeys tweaked the business model to target consumers, set up shop in Santa Monica and, in mid-2017, the Biostrap body data monitor was born.

“We saw a market in customers who have a basic grounding in fitness and physiology whether they have specific health issues or are looking to optimize their physical performance,” Sameer Sontakey said.

Infrared technology helps make this possible, he said, by peering several layers beneath the skin surface in order to collect data.

Biostrap has developed three wearable devices intended to function as a full set: an arm/wrist band, a chest band and a shoe clip. Data collected from these devices is sent to the cloud where it can be accessed through a software app.

A full set costs about $320. That’s more expensive than a Fitbit (which ranges from $60 to $200), but cheaper than the Apple Watch, which starts at about $350. The devices can also be purchased separately for about $175.

So far, sales have been modest: The company reports it has about 15,000 users.

One of those is Matt Delgado, a chiropractor in Austin, Texas, who has Graves’ disease. “After I was able to treat my Graves’ disease into remission, I was looking for a way to track my own health, especially heart rate variability,” Delgado said. “Many companies use a finger clip that takes a single snapshot measurement. I wanted something convenient and wearable that tracks this on a continual basis.”

Delgado said the Biostrap devices have given him more insight into his sleep patterns. “I’ve learned I need to slow my own life somewhat,” he said. “This Biostrap device has been an eye opener for me as to how valuable rest really is.”

Sleep analysis is now an area the Sontakeys are emphasizing. At a recent digital health conference put on by the Southern California Biomedical Council, a downtown-based trade group, Elias Arjan, Biostrap’s vice president of business development, touted the benefits of sleep monitoring for patients with sleep apnea.

More broadly, Sontakey said, “There is a lot of focus now on how the body performs at rest, not just after physical activity.”

The Sontakeys are seeking investments to scale up production and pursue what they hope will be a more lucrative market — physical therapy and physical fitness. They plan to target sports team physicians, fitness coaches, rehabilitation therapists and even sleep clinics.

One of their early customers is NeuroForce1, a Scottsdale, Ariz.-based diagnostic testing company specializing in enhancing athletes’ performance. NeuroForce1 Chief Executive Jesse Kevan said the company had been looking for devices that collected clinical-grade biometric information.

“I looked at the Apple Watch and Fitbit, but the Biostrap was the only one that could produce data on a clinically validated level,” Kevan said, noting that the devices yielded results within 1% of the accuracy level of traditional clinical tests.

NeuroForce1 now incorporates Biostrap in its online platform, with software it developed in conjunction with Biostrap to give the company’s end-user athletes even more biometric measurements.

Kevan said this new platform is in beta testing on a couple hundred active NeuroForce1 users and that no problems have been encountered so far.

Scale LA’s McPartland said Biostrap’s success will depend on two major factors: keeping customers using their data-collection products and staying a step ahead of the competition.

“The biggest obstacle is making sure people stay with the product and use it consistently,” McPartland said.

McPartland said one way to persuade people to stay with the product is to have physical therapists and other medical professionals strongly recommend its use.

Meanwhile, Biostrap will likely have to adapt as other wearable device companies eventually introduce their own in-depth monitoring devices.