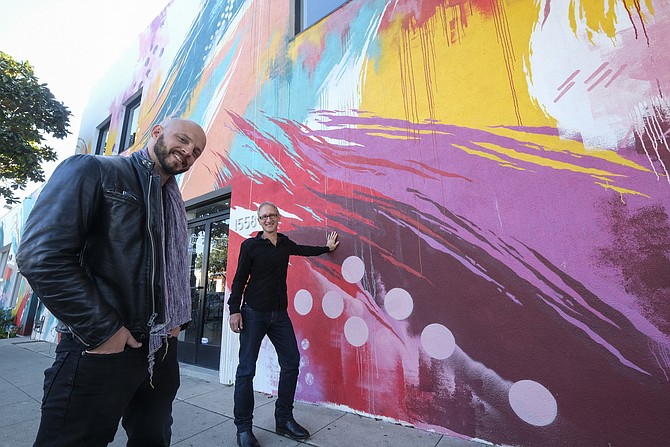 Beautify co-founders Evan Meyer and Paul Shustak connect brands and landlords with artists who can enhance their spaces. This mural by David "Meggs" Hooke is at Cross Campus in Santa Monica. Photo by Ringo Chiu.

Street art, particularly murals and other sorts of wall painting, has developed a reputation as a guerilla enterprise.

It’s done by rebellious artists who go rogue on empty walls in the dead of night, the thinking goes. Legal permission is unlikely, and financial rewards are rare.

Santa Monica-based Beautify, a platform that connects street artists with sponsors, landlords and business owners, is changing that stereotype.

The company is incorporating street art and street artists into a for-profit business model.

After a seven-month test phase that resulted in more than 1,000 murals in greater Los Angeles, Beautify is going national.

The company is scheduled to announce its official launch on March 4, when it will unveil plans to roll out in cities including Seattle, New York and Austin, Texas.

Beautify is the for-profit offshoot of the 6-year-old nonprofit Beautify Earth, which was conceived and originally funded by Executive Director Evan Meyer to create murals.

According to Beautify Earth, that effort was inspired by “the art and community spirit of Burning Man” as well as a the noted Wynwood Walls project in Miami, which began revitalizing blighted walls in the city’s Wynwood warehouse district in 2009. Meyer said Beautify Earth plans to continue its nonprofit work for underserved communities and schools.

Among the local murals created by Beautify Earth and Beautify artists are work for Playa Vista-based Toms Shoes and Avocado Green Mattress in Santa Monica. Other major brands that have sponsored murals via Beautify Earth or Beautify include American Express Co., Zappos.com and Lululemon Athletica Inc.

“Beautify Earth has the resources to cultivate new art and helps new artists bring their vision to life in a way that might not be possible without their guidance,” said Misti Kerns, president and chief executive of the tourism organization.

Meyer and Beautify co-founder Paul Shustak said the Beautify platform maintains a database of street artists and their work.

Businesses or landlords can browse the database to find an artist who would be a good a fit for their property.

Meyer and Shustak said the arrangement can involve just a landlord or a landlord and a sponsor who might pay the landlord for use of a vacant wall.

Unlike hiring an artist to create promotional signage or a company logo, the artwork does not usually contain direct advertising for a business or a product. Murals often bear a “thank you” to the sponsoring brand and may include the Beautify Earth hashtag or a QR code, which Meyer and Shustak said can serve to promote the business and the artist through social media.

“It’s not advertising like billboard advertising,” Shustak said. “There is not product- and service-level advertising. There is a value component that they are trying to deliver in an authentic way. … No one is taking photos in front of billboards.”

The team added that sponsors might get involved by sponsoring a single wall or some type of campaign or activation around a single artwork or series of murals.

While the focus is on the artwork and beautification, the arrangement is not purely art for art’s sake, since the owner or sponsor of the public space generally approves the mural. 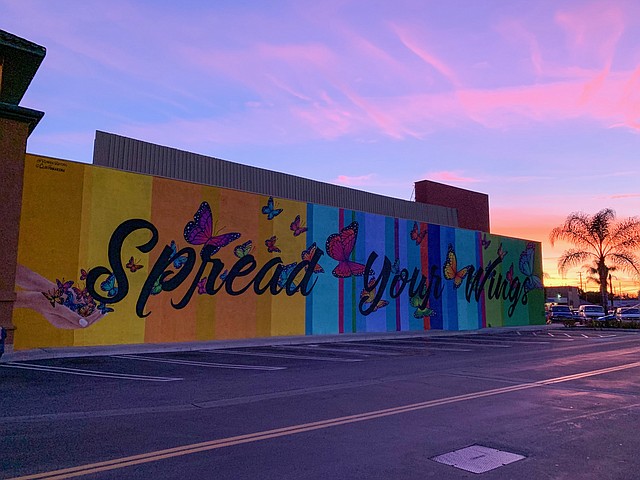 Woodland Hills-based NewMark Merrill Cos. Inc., which owns and develops shopping centers in California, Colorado and Illinois, has Beautify murals at several locations, including the Norwalk Town Square mall in Norwalk.

“For us, I look at our shopping centers as an extension of every community,” said NewMark Merrill President and Chief Executive Sandy Sigal. “If you are going to (create) the modern piazzas of today, the town squares of today, how can you not include artists in this mix?”

However, Sigal said, the company does ensure that the artwork is in keeping with company values by reviewing several artists’ proposals before committing to fund the artwork.

“I wish I could say I was that altruistic,” Sigal said with a laugh when asked whether the company surrenders complete artistic license. “(We want) hopeful messages, uplifting messages (that) reflect the heritage of the community or the artist.”

The art should also be family friendly, Sigal added. “We also want to make sure this is not going to be divisive in any way, nothing that makes a political statement. We are not trying to be provocative,” he said.

Artists interviewed for this story did not seem to be bothered by limits that might be placed on their creative vision by the property owner or sponsor. 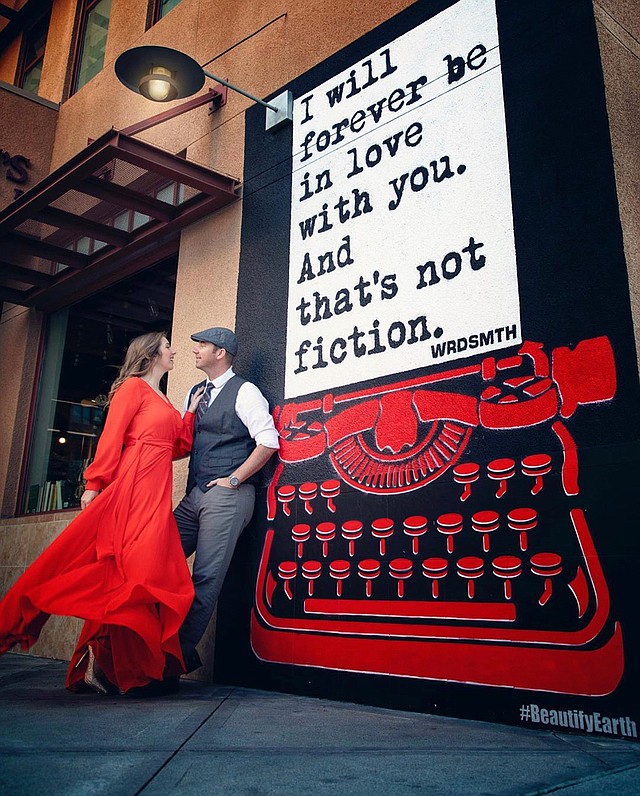 A mural on Vroman's bookstore in Pasadena by artist Wrdsmth, who has worked with Beautify.

Hollywood-based street artist Wrdsmth, who was paid between $2,500 and $3,000 through Beautify to create a large-scale mural for Vroman’s Bookstore in Pasadena, said his work has always had a positivity that attracts social media photographers and fits the ethos of many businesses.

He added that sanctioned work has a better chance of longevity because an active owner can help prevent a mural from being tagged, painted over or destroyed.

Wrdsmth said he will most likely continue to divide his work 50-50 between sanctioned and unsanctioned work.

He added he would not work with companies looking for him to incorporate slogans and logos into his art.

As long as he’s in business with a company that embraces his style, however, Wrdsmth is in with Beautify. “I love that they’re doing this for artists,” he said. “I don’t have time to knock on doors, and they are taking that time. Business owners are hungry for art … (Beautify) is adding oil to the machine.” 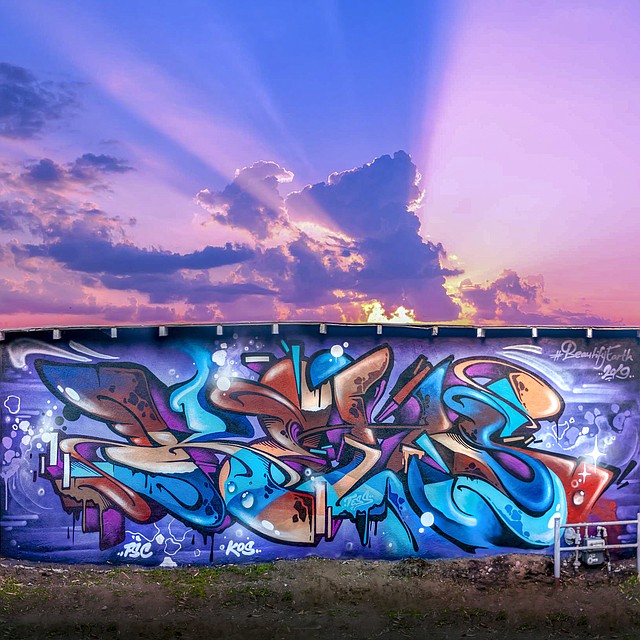 Mikael B., who made this mural in Venice, says there's "always the right artist for the right project."

Encino-based artist Mikael Brandrup, whose professional moniker is Mikael B., started his art career as a graffiti artist in his native Denmark. In Los Angeles he has created city-commissioned murals downtown.

His first Beautify mural, for which he was paid $2,000, is in Venice. Brandrup said Beautify offers a chance for new street artists to break into the category while getting paid for their work. He also points out that an artist who does not want to adhere to the sponsor’s requirements can always turn down the job.