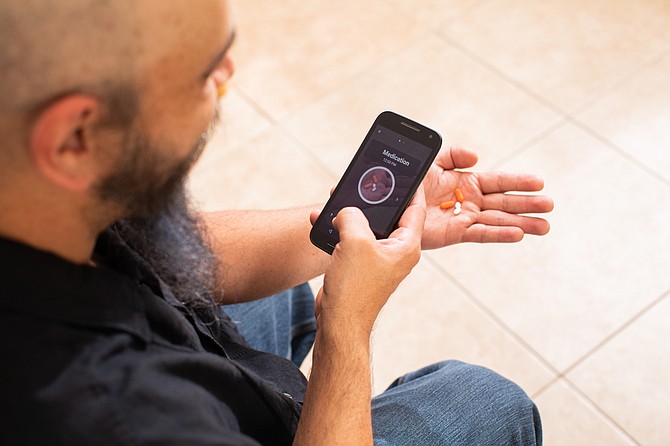 “I wanted to create a company that would have motivated my Uncle Roy to change his habits so that he could have had a very different life,” Loper said.

As he was establishing the company, Loper met Alec Zopf through a website that pairs up potential entrepreneurs based on the industry they are interested in and their skill sets. Zopf became a co-founder and chief technology officer. Loper’s brother Mark soon joined the company as head of design.

In 2018, Wellth received $5 million in seed funding, much of that from Boehringer Ingelheim Venture Fund — a unit of Ingelheim,

Later that year, Wellth moved its headquarters to a coworking space in Playa Vista to finish developing the app. Loper said the Los Angeles area is cheaper to operate in than New York or the Bay Area.

In May, Wellth received another $10 million in funding from its two investors and several other venture capital groups; the company is using those funds to move from the pilot study phase to full marketing mode; the company also moved earlier this summer to its own space in nearby Mar Vista.

Desert Oasis execs realized Wellth provided an approach they had not previously tried to increase patient adherence. The company signed up with Wellth in March and started enrolling 300 patients in the incentive program, just as the Covid-19 pandemic hit and put a stop to routine patient visits.

“When people don’t take their medications, we are not using our full arsenal to improve their health,” Brian Hodgkins, Desert Oasis Health’s executive vice president of clinical operations, and Lindsey Valenzuela, administrator of population health and prescription management, said jointly in an email.

Hodgkins and Valenzuela said patients who failed to maintain an 80% adherence rate in taking their medications were the ones enrolled in the program. They said that preliminary results over the past four months show the adherence rate among these patients rising to 94%.

At this early stage, though, they said it was not yet possible to determine how much money was being saved by patients avoiding emergency room visits or hospital stays.

“There are areas of the Coachella Valley that have limited cellular service,” they said. “Some of our members have been concerned that when a picture doesn’t go through their carrier to Wellth in a timely manner, they could be penalized with reductions in their monthly incentive. Wellth has been very amenable to working with members who have had connectivity issues to ensure those who are adherent continue to receive their incentive.”

This internet connectivity issue has also been an occasional problem for a patient in Green Valley, Ariz., (near Tucson) who is not enrolled with Desert Oasis.

Dave Douglas, a former building contractor and behavioral health worker, suffered a traumatic brain injury in a car accident five years ago and has had problems with his short-term memory. He has to take several pills twice daily.

“I would frequently forget to take my medications because of my brain injury, especially in the evening,” he said.

In March, he said, someone connected with his Medicaid provider texted him about Wellth’s app and he started using it.

“The best thing about it is the reminders the app sends for me to take my medications,” Douglas said. “It means I don’t have to have somebody around to remind me. For the first time, I am consistent in taking my medication on my own.”

He said he sometimes has trouble sending over photos of the pills in his hand, either because of poor internet connectivity or because of his memory problems. But, he said, Wellth’s customer service hotline has always been able to resolve the issues for him.

The app has been so successful, Douglas said, that taking his medications has now become an ingrained habit that he usually doesn’t need to actively remember.

And that raises a key question and challenge for Wellth. The whole aim of the incentive app is to get patients habituated to taking their medications, so they don’t have to think about it. When that point is reached, the incentives are no longer necessary.

But scaling back and ending the incentives can be a tricky business, ASU’s Stecher said. The financial pressure from the health care payors is, of course, to end the incentives as soon as possible.

“But if you end the incentive too soon, the patient can start forgetting again to take their medications and end up back in the hospital or worse,” he said.

Finding that sweet spot that satisfies payor pressure to end the incentives without risking a relapse of forgetful behavior is still an active area for research, Stecher said.

“The answer to that question will be key for Wellth as it approaches future payor clients,” Stecher said. “It can be summed up as, ‘How long do I need to pay these incentives, and how much will I have to pay to ensure the savings?’”