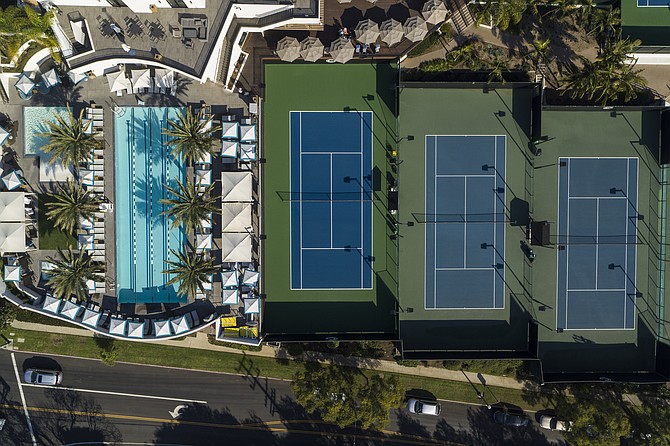 The Griffin Club unveiled new cabanas, a jacuzzi and a second swimming pool, making it the only club in L.A. with two outdoor pools.

Despite Covid-19 forcing people to socially distance and largely remain indoors, at least one athletic club is working on connecting guests and bringing its growing member base in.

The Griffin Club in Cheviot Hills, formerly known as the Beverly Hills Country Club, has a history that dates back to 1926 and has counted Humphrey Bogart, Errol Flynn and Caesar Romero among its guests.

Meriwether Cos., which has an office in Santa Monica, took over the club in 2015 and is investing more than $20 million to improve the property.

The company just unveiled a second swimming pool, new cabanas and a jacuzzi. According to Meriwether, it is the only club in L.A. with two outdoor pools.

Graham Culp, a partner at Meriwether, said “the business plan at the time was to take a club that had deteriorated and was not appealing to a growing demographic in the market” and make it more attractive to a wider variety of people.

Since Meriwether took over the club, it has added an average of 236 new members each year and now has roughly 1,700 members.

Meriwether has made a major push to attract younger members. The average member age used to be 65. Now roughly 85% of the members are under 60.

Director of Membership John Myers said it has also been able to attract people from a variety of backgrounds, as opposed to some recently opened social clubs geared toward specific industries.

“What sets us apart from a lot of other clubs is diversity,” he said. “Some clubs are very homogenous.”

Other clubs to open in L.A recently include Soho Warehouse, which opened in late 2019. Spring Place recently opened in Beverly Hills, H Club in Hollywood, and the AllBright and San Vicente Bungalows in West Hollywood.

Myers said when Meriwether first acquired the club, it had a hyperlocal membership base, largely in Beverlywood and Cheviot Hills, but now has attracted people from a wider area including most of the Westside.

“A key differentiator between us and other clubs is we offer more than just one amenity,” Culp said, adding that while some clubs are focused either on social and dining or fitness, the Griffin does both. It has eight tennis courts, two outdoor pools, a variety of dining options, fitness offerings and event space.

It has plenty of activities for kids, too.

“It increases the diversity and types of members we attract,” Culp said. “We’re a hybrid between the social clubs popping up and a traditional country club. The one thing we don’t offer is golf.”

Myers said the Griffin Club is attractive to people who “have outgrown some of what other clubs offer.” It has even added members during the pandemic.

Myers said the club’s large footprint — it sits on more than 4 acres — has been key to its success.

Tennis is still considered safe, despite Covid-19. The club has also transformed a yard once used for large events into an area for private Pilates classes, a modified summer camp and more. An outdoor banquet space was also turned into an outdoor cardio room.

“We’ve been smart about utilizing all of the space we have available,” Myers said.

The club has also expanded dining options at the pool bar and grill, adding things like sushi and more vegetarian options.

The Griffin Club is using an app to allow members to make reservations for the pool or restaurant instead of calling, emailing or ordering food for pick-up. They can also scan a QR code to see a menu pop up.

“It’s allowed us to be a lot more efficient for our members but also on the organizational side,” Myers said.

Looking forward, Culp is considering converting some areas to “coworking workspace for members hoping to get out of their homes” and be outdoors. To do that in a safe way, workstations and other furniture will be spread out.

And the club is still busy.

“I believe that the private club landscape, particularly our type of club, which is a more accessible price point … we have seen it with our members that demand for the club is just as high as it would be any other year,” Myers said.

While many clubs don’t publicly disclose initial fees, clubs like the Jonathan Club are reported to have an initial fee of more than 30,000. And news reports suggest that the initial fee for the Hillcrest Country Club is more than $185,000.

The club does not do traditional advertising and relies on referrals for new members.