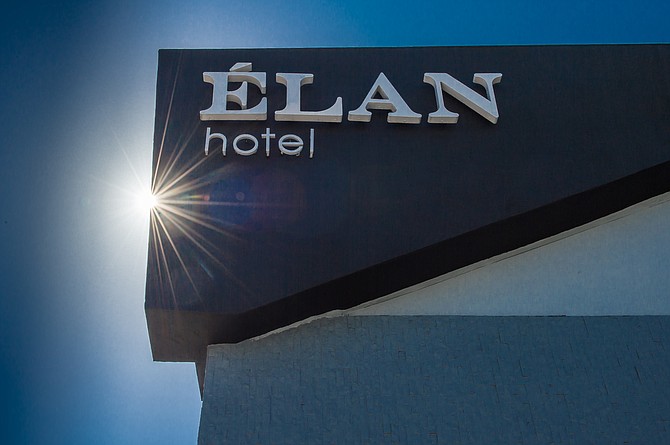 One of the sectors hit hardest by the coronavirus has been the hotel industry, which has found itself facing record-high vacancies at a time of canceled travel plans and safer-at-home orders.

“This is a bigger hit to the industry than even 9/11,” said Heather Rozman, executive director of the Hotel Association of Los Angeles.

Leisure and hospitality contracted the most of any sector in California in March, losing 67,200 jobs, the state has reported. And during the first week of April, statewide hotel occupancy fell to 22.7%, down 70.2% compared to the same week a year ago, said Caroline Beteta, president and chief executive of Visit California, the state’s tourism board.

“It’s dire,” she said, explaining that the 22.7% figure includes “first responders (and) relatives trying to socially separate from family members.”

“It’s a bad situation,” she said. “Some hotels have decided not to reopen until Sept. 1.”

Alan Reay, president of Atlas Hospitality Group, said that by his reckoning occupancies are even lower, at less than 20%. And that is prompting drastic measures.

“All hotels are trying to reduce expenses as much as possible,” Reay said. “From a payroll standpoint, they have cut staff way back. On their debt, they have attempted to negotiate with lenders to defer payments, and that is anywhere from two months to six months. The lenders basically are not charging them interest during that period and (are) adding it to the loan balance.

“They are also negotiating with the service providers to get discounts or defer payments,” Reay added. “Most, if not all, have applied for loans through the government and the (Small Business Administration). In some extreme cases, we’re seeing hotels being closed down entirely because of a lack of business.”

Devang Patel, chief executive of Cerritos-based Kamla Hotels, oversees more than a dozen properties in California. He said his company has been hit hard by Covid-19 and has been working with team members and lenders over the last few weeks to mitigate the pandemic’s impact.

“Our lenders have been great,” he said. “A lot of our lenders are community banks, and they have been phenomenal. We have kept them up to date and given them day-by-day updates and keep them informed, and that communication has been great.”

The group’s hotels in L.A. include the recently opened Elan Hotel West Hollywood, the American Inn Downey and the Torrance Inn & Suites.

It’s not just hotels that are feeling the pain of the pandemic, of course. The hospitality industry as a whole has been hit hard.

“It’s a relatively unprecedented situation hitting several sectors harder than others,” said Nick Griffin, executive director of the Downtown Center Business Improvement District. “Certainly, hospitality and tourism, along with retail, are taking the biggest hit on this. In terms of how they are managing, my sense is that each hotel is doing its best to cope with the obviously difficult situation. Occupancy is way, way down. They are operating on a very reduced capacity for the most part.” 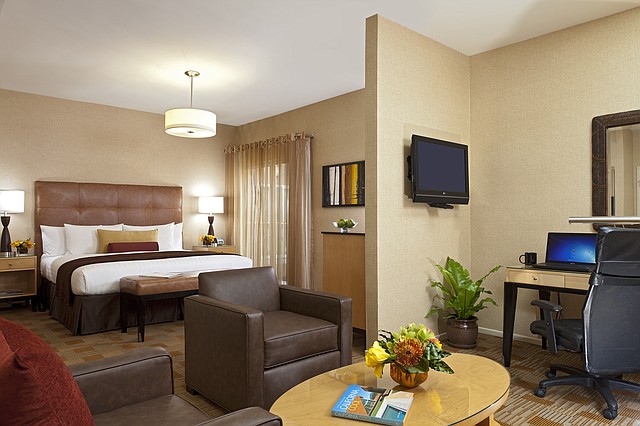 Elan Hotel and others are donating rooms for first responders.

Many hotels have been transformed into housing for medical professionals who are looking to distance from their families.

Other hotels have taken in Covid-19 patients or the homeless.

“Even though the travel world is slowing, my world has been busier than ever,” Rozman said. “We’ve been working with the government to support the outreach to the hotel community looking to support Covid response.”

Those rooms make up about 30% of all L.A. hotel rooms and are being used for people experiencing homelessness, victims of domestic violence, the elderly and medical personnel.

Some hotels are going under a leasing contract with the state, city or county to house the homeless during this time. Funding comes from the government through the Federal Emergency Management Agency, the state and the county. Rates are negotiated with the property owner.

“The most success we’ve seen so far is the independent smaller hotels. The county has said they are very successful in signing lease agreements with those independent brands,” Rozman said.

Reay said most contracts were on a 30-day basis. The hotels then have a “skeletal staff,” he said. “It is being run more as an apartment building than as a hotel.”

Rozman added that many larger brands are housing medical professionals sheltering away from their families. For example, Marriott International Inc. and Hilton Hotels have joined with American Express Co. and JPMorgan Chase & Co. to donate 1 million hotel rooms for medical professionals.

In instances where Covid-19 patients are staying in a hotel, medical personnel are on hand.

“It is a way for a hotel to generate some revenue. We are seeing occupancy levels in single digits, whereas on a good day in the summertime, hotels will see 80% to 95% occupancy,” Rozman said.

Patel’s hotels are in the midst of a community outreach program, working with nearby hospitals.

“We’ve been either donating some of our rooms for doctors and nurses and first responders, and in some cases have been given a bottom, bottom low rate to help,” Patel said. Rooms are discounted more than 50%. 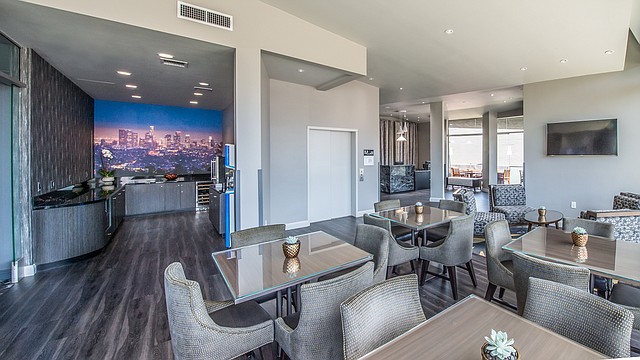 In addition to reaching out to hospitals like Cedars-Sinai, the hotel group is also working with the National Guard and regional food banks.

Additionally, Patel is making common areas available for hospital staff to relax or have meetings. And he is donating supplies like toilet paper, soap and shampoo to the Los Angeles Ronald McDonald House.

“We’ve seen a few hospitals sending personnel and paying directly through the hospital at a discounted rate,” he said.

The hotels are working with minimal amounts of staff and not offering amenities like room service.

“For the guests who are coming to stay with us, they are very understanding of the situation, and we are able to work with very tapered-down offerings,” Patel said.

Hotels that are being closed, or those at low occupancy levels, affect other areas of the economy.

“Transient occupancy tax is something that powers local communities,” Beteta said. “If the hotels aren’t full, it’s going to have a severe ripple effect.”

She said 46 cities in California rely on the tax for 30% or more of general fund expenditures.

“We’re going to see some financially stressed situations with our local governments,” Beteta said. “People don’t realize that tourism spending has a catalytic effect and many indirect and induced impacts. There are tens of thousands of small businesses that rely on tourism expenditures. Many of those start in hotels. Think about all those ancillary services that (come) out from people staying in hotels.”

She added that roughly 455,000 hospitality workers were expected to be out of a job by the end of April statewide. The travel industry is expected to lose $10.9 billion in revenue in April alone.

“A crisis like this really reveals the complexity and interconnectedness of a city like Los Angeles, and particularly a place as dynamic as downtown,” Griffin said. “The impact on the hotel industry has a ripple effect. ... The hotel tax revenues that would be going to the city aren’t going to the city.”

Many industry executives and observers agree that it is too soon to say when the industry will recover, largely because it’s not yet known when stay-at-home ordinances will be lifted. But some are optimistic.

“Top-tier cities do recover from these things,” Griffin said. “Pandemics and natural disasters and other major events like this have yet to truly crush cities. We usually come roaring back.”

Griffin added that though downtown is the site of a large percentage of the county’s new hotels and development, the region has a solid foundation that would help it in the long run. He expects the next 18 months to two years, though, to be an adjustment period.

Rozman said many hotels are looking ahead to when restrictions are eased and travel is encouraged.

But Reay said that just because local restrictions are lifted doesn’t mean hotel operators can breathe easily. He pointed out that international tourism is a big part of what keeps Los Angeles hotels at high occupancy levels.

“The big question is when the economy opens up, and when are people going to be allowed to travel, and when will people think it is safe and secure to travel,” Reay said.

And there may be surprises as to which hotels rebound first.

“The ones that we will see recover sooner and the quickest will be hotels in drive-to markets, like up and down the central coast of California,” Reay said, adding that smaller, independent hotels with fewer numbers of rooms may be preferred by travelers still wary of big groups.

“There’s a big lag time in making those bookings, and it will take some time to get past this coronavirus situation and for people to feel safe to have meetings and conventions again,” Reay said.

He added that it may be awhile before people want to go to theme parks again, which also drives many hotel stays in Southern California.

“Once the quarantines are lifted on a patchwork basis, places that provide for natural social distancing could see a bit of a bounce earlier on than those that have infrastructure around large events where people are tightly gathered,” Beteta said.

Kamla Hotels’ Patel said that, for now, his properties are focused on deep cleaning and “making sure that when we are ready to open back up again, we are able to provide clean and comfortable up-to-date product for our guests.”

Beteta said hotels could change in many ways this year.

“After an event like this, there will be a lot of changes, and I’m sure consolidation will be a likely occurrence over the period of recovery,” she said.

Beteta added that Visit California expects the industry to rebound in 2021 but still trail behind numbers seen in 2019.