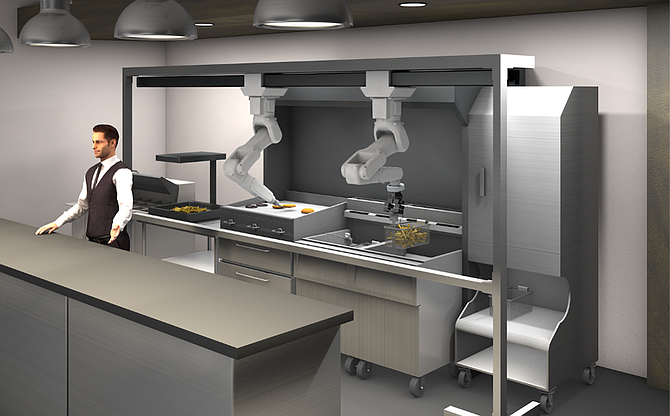 Miso Robotics' second-generation Flippy, a robotic arm that operates the fryer in commercial kitchens, including at Dodgers Stadium.

Miso Robotics Inc., a Pasadena-based robotics and artificial intelligence company, is seeking to raise a $30 million Series C through crowdfunding on the SeedInvest platform.

The company develops robots that can perform basic cooking tasks in commercial kitchens. The same company created Flippy, the robotic arm that operates the fryer at Los Angeles Dodgers games. Flippy has served more than 50,000 pounds of chicken tenders and tater tots to Dodgers fans since July 2018, according to the company.

Miso Robotics said it received approval from the Securities and Exchange Commission on April 7 to raise money through crowdfunding for up to 12 months.

Miso Chief Executive Buck Jordan said the round is likely to end early.

“We’re very confident. I think Miso is hitting all the things that consumers care about today. It’s very focused on health and human safety,” he said.