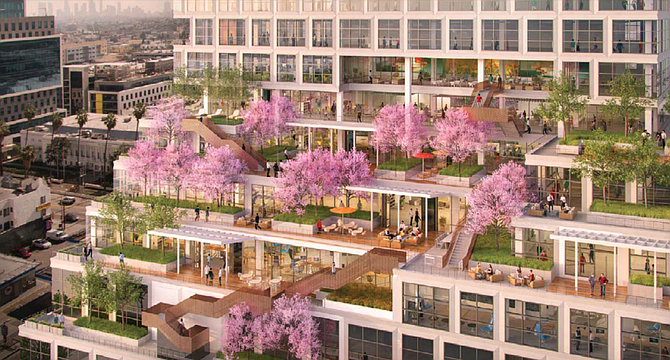 Tech and media firms have been on a leasing tear in recent years, signing leases for millions of square feet in greater Los Angeles. They have increased their footprint by 6.4 million square feet in the area since 2016, coming to occupy 40.5 million square feet of office space in the L.A. and Orange County region, according to a report from CBRE Group Inc.

There are now nearly 3,000 tech and media firms in the region. The biggest concentration is in West L.A. — 33% of occupied tech and media space is in this area.

Demand for space has pushed up rental rates, the CBRE report found. Rents in West L.A. have increased 52%, and in the Hollywood/Wilshire Corridor they’ve climbed 47% since 2016. 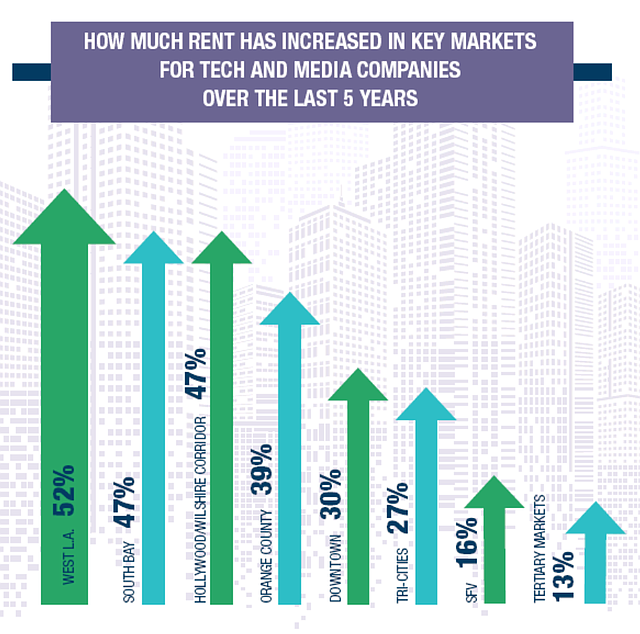 “In the last five to 10 years, the economy has been entirely dominated by media and tech. Media and tech, and tech especially, have completely supplanted those other industries,” said Avison Young Principal Ted Simpson, referring to sectors such as banking, law and energy that previously drove the leasing market in L.A.

Willett said the increase in tech and media leases in the Hollywood/Wilshire Corridor area “is one of the most exciting changes.”

It used to be that many studios left Hollywood for Burbank and Culver City, Willett said, but “in the last few years we’ve seen movement back into Hollywood proper.”

Simpson said 80% of new leasing is done by media and tech companies if renewals are excluded.

Carl Muhlstein, international director at Jones Lang LaSalle Inc., said a company will often pick one geographic area to focus on, and newer buildings “are being customized for these tenant leases. The main driver is where they can hire people, where are the jobs.”

Many of the leases signed by tech and media companies in L.A. in recent years have been preleases — leases signed on properties that haven’t been delivered to the market yet.

Los Gatos-based Netflix Inc. signed a prelease for Hudson Pacific’s 328,000-square-foot Epic building and for the entire 355,000-square-foot office space at Academy on Vine, which is being developed by Kilroy Realty Corp. Both properties are in Hollywood.

Apple Inc. has leased all 128,000 square feet of office space in a development on the corner of Washington and National boulevards in Culver City.

The pace of prelease activity has slowed, though. Use of preleasing was strong in 2018 and in the first half of 2019, but use of the tool wasn’t as robust in the second half of 2019 and the first part of 2020.

Media and tech companies have “been dominating the preleasing activity,” Muhlstein said. “They have a digestion period, not just because of the current events, but when you prelease several million feet and you haven’t even hired the people or even determined what user groups will fit in those buildings, you see a digestion period. There may be a lull in the market for a year to 18 months.”

Willett said that in 2018 and early 2019 there were a lot of “landmark leases” and that current preleasing numbers are still above what was seen 10 years ago.

Muhlstein said the reason tech and media companies have been preleasing is simple: It’s become a necessity.

“As the amount of space has tightened in these submarkets and vacancy has decreased, it’s been imperative in these companies with ambitious growth plans to secure the space upfront,” he said.

Until there is more construction, Muhlstein said, it’s unlikely that large blocks of desirable space will be available for these companies. 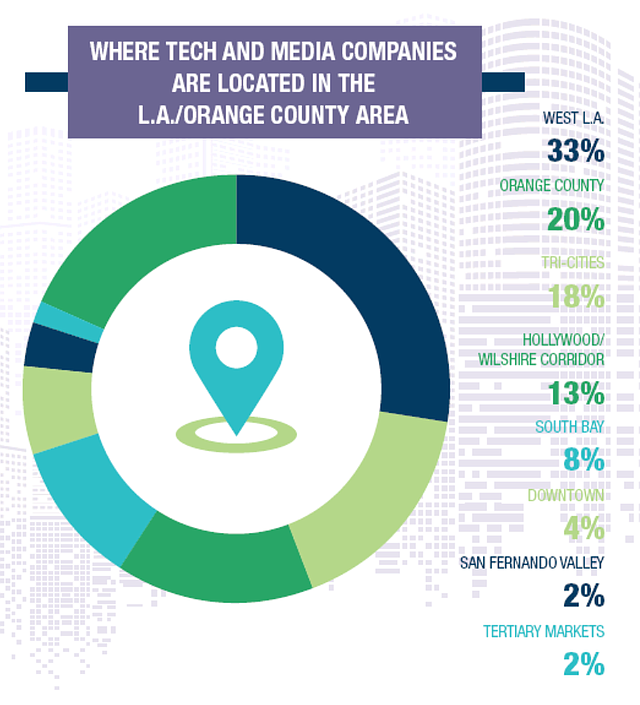 Simpson added that L.A. is “a mature city with very little office development,” and previous recessions had paused development, which meant the region has had some catching up to do.

“You really have one and a half to two tenants for every piece of new, cutting-edge, decent space. They are preleasing from a competitiveness standpoint,” he said.

Simpson said companies having such large amounts of space in specific markets could be an issue down the road.

“If something happens at Netflix, such as competition from Disney Plus, that resulted in any kind of downsize, what would happen to Hollywood?” Simpson asked.

While there are a lot of other companies that could ensure Hollywood remains a desirable market, Simpson added, it could also “create a real hole. I do worry about risks in the market and the lack of diversification.”

Another concern is that smaller, less cash-rich companies are “getting squeezed out of places like Hollywood and Culver City,” he said.

Perhaps the biggest question, he said, is whether people working remotely during the Covid-19 pandemic will lead employers to rethink space needs.

Muhlstein said another issue is the lack of additional product in the pipeline, due to limited available land, hard entitlement processes and financing difficulties.

“There’s nothing that leads me to believe that it’s slowing down,” he said.

About the West LA Market

For more data included in this feature, see the April 13, 2020, print edition.