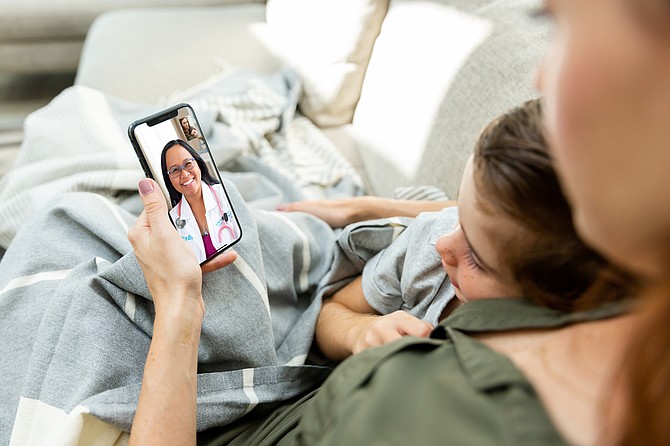 Local telehealth companies, experiencing a big boost in both hospital clients and patients, are rapidly adjusting their business models to seize the opportunity as the impact of Covid-19 and social distancing reverberates across the region.

For some companies, that has meant moving telehealth business segments from the sidelines and putting them front and center.

The pandemic has prompted other businesses to rapidly expand their doctor networks and technology platforms to handle huge volumes of telemedicine patients.

And still other telehealth providers are exploring new partnerships with hospitals and medical groups racing to set up their own remote services.

Telehealth and telemedicine are interchangeable terms used to describe the process of doctors and other health care providers using telecommunications platforms to connect with patients remotely.

Many telehealth platforms also include billing, coding and other technologies.

“In the last few weeks, we’ve seen about 10 years’ worth of change in telehealth,” said Yarone Goren, co-founder and chief operating officer of SteadyMD Inc.

Goren, who works in the Westlake Village office of the St. Louis-based company. He said he has seen a spike of more than 50% in consumer inquiries since early March.

Goren added that in coming months, SteadyMD hopes to reach deals to license its platform technology to hospitals, health systems and insurance companies. “We’ve gotten a lot of interest from these sectors in recent weeks,” he said.

“Over the past 18 months, we’ve invested in our platform millions of dollars to do many of the things we are now offering for the first time,” Edwards said. “In response to demand, we have onboarded 16 health systems and more than 400 doctors onto our system in the past four weeks.”

Edwards said demand for telehealth services from his hospital clients has been skyrocketing in the last several weeks, prompting a shift from its previous focus on connecting interpreters through its telecom platform to enable doctors and nurses in hospitals to communicate with non-English-speaking patients to a doctor-based telehealth network.

“Clients are asking for us to add ability for their patients to converse with family members remotely and to have nurses and doctors directing care for patients who are self-isolating at home,” he said. “That’s less people who have to go to the hospital and is really appropriate for mild to moderate symptoms.”

Telehealth services bring many advantages during the Covid-19 outbreak besides keeping people away from increased exposure levels inside hospitals, according to Edwards and other telehealth company executives interviewed for this article. Fewer patients coming to the hospital also means more beds available for Covid-19 patients and more protective gear available for health care workers, both critical factors as coronavirus patients surge into hospitals.

Edwards said that once the Covid-19 crisis passes, he expects many of these telemedicine forays to become permanent.

“Many people are now using telemedicine in their homes for the first time and are beginning to integrate it into their routines,” he said. Santa Monica-based Catasys Inc. announced on April 7 that it is expanding its telehealth platform for behavioral health services through an agreement with an unnamed health insurance plan into four new states: Arkansas, Indiana, Kentucky and Wisconsin.

“Given today’s environment, we anticipate that expansions will continue to increase our outreach pool of eligible lives, and enrollments should improve as more and more states mandate that citizens shelter in place during the Covid-19 pandemic,” Catasys Chief Executive Terren Peizer said in a statement.

Several local firms have in recent weeks shifted from their traditional services into telehealth.

The number of patients the company is servicing has grown nearly seven-fold over the last four weeks, Desai said, though he declined to give an actual number of patients. He said many patients have come through referrals from their insurance companies.

Desai said Heal built its own telemedicine platform, using some of the $100 million the company has raised through several rounds of financing since its founding in 2014. (Among Heal’s most prominent investors are singer-songwriter Lionel Richie and Jamie McCourt, the current U.S. Ambassador to France and ex-wife of former Los Angeles Dodgers owner Frank McCourt.)

“We’re trying to hire for the longer term, to find doctors willing to grow with us over the next five years, not just to serve during this immediate crisis,” he said.

Gene Howell, Reliant’s chief executive, said that even as late as February, only a handful of patients were ever referred to telemedicine services. But then came Covid-19.

“Overnight, our patient count (at Reliant’s clinics) dropped by 30% to about 350 per day as patients were too scared to come into our clinic for fear of catching Covid,” Howell said. “That’s when we realized that in order to serve our patients, we had to turn to telemedicine.” According to Howell, Reliant hired two third parties — Cloudbreak and health tech company SolvHealth of San Francisco — to develop a telehealth platform on the fly and launched its telehealth service in late March. Within a week, 130 patients had started using the service, he said.

“We converted almost overnight from brickand-mortar to telemedicine,” Howell said.

Meanwhile, Santa Monica-based PatientPop, which provides health care practice growth consulting services, announced March 24 that it, too, was getting into the telehealth business with its launch of a telehealth platform.

In its announcement, the company stated, “PatientPop believes that telehealth — with the recent expansion of telehealth delivery by Medicare and other changes in response to Covid-19 — will ease the burden providers are facing during the pandemic and will become a preferred method of care delivery beyond the crisis.”

Howell agreed that many of the conversions to telehealth now being made in the midst of the Covid-19 crisis will become permanent.

“I don’t think we’ll go back to where things were before, especially for our workers’ compensation clients,” he said. “Employers are already seeing the great advantage of diagnosing injured workers quickly onsite, without the employee having to leave the workplace.”