The beachside AES Redondo Beach Power Plant is likely to be retired at the end of 2023.

AES Corp. has sold a prime 51-acre coastline site in Redondo Beach to a private developer.

Sale terms were not disclosed for the property, which has housed a power plant for more than 100 years.

As part of the sale, the new owner will allow the plant to operate until the end of 2023 before the facility is permanently retired.

“We are committed to balancing the needs of the local communities now and into the future,” Lisa Krueger, president of AES’ U.S. Strategic Business Unit, said in a statement. “This means being able to keep the lights on for the short term while committing to a predictable and responsible transition for this beautiful piece of California’s coastline.”

“It’s monumental that it’s changing ownership, but we really can’t tell who’s going to actually end up owning it or how much they paid for it,” he said.

Reports indicate that the property was purchased by local developer Leo Pustilnikov.

Brand said he had no reason to believe Pustilnikov had not purchased the site, as previously reported by various news outlets, but it was unclear if the developer had partners or worked with a company on the acquisition.

The redeveloped land will include up to 25 acres of open space and a mixed-use development. The city of Redondo Beach will have an option to purchase up to 15 acres in the future if the plant is approved to operate until the end of 2023.

Brand said AES and the developer had been in discussions for some time. An earlier version of the deal had included an arrangement for the city to buy 25 acres for $2 million, according to Brand.

“We had a lot of interest on the site with many offers,” Lustig-Bower said. “It’s very rare to be able to find 51 acres anywhere on the coast in Southern California.”

Shannon agreed, adding that the site saw interest from both foreign and local investors.

“The beach cities of Redondo, Manhattan and Hermosa are highly desirable markets for investment capital,” Shannon wrote in an email. “It is very difficult to find investments with scale in these markets, though. The 51-acre AES site is a truly generational opportunity to get scale in a coastal location.”

AES, which is based in Arlington, Va., has been working on selling the property since 2018.

The company has owned three coastal power plants comprised of 14 generating units in Southern California since 1998. The other coastal plants are in Huntington Beach and Long Beach.

In the past decade, AES has been retiring the once-through-cooling generating units — units that generally filter large amounts of water and discharge the water cooled a single time with ocean water. Some argue the process is dangerous for marine life.

AES has retired seven of the 14 units already.

Some environmental groups, though, have raised concerns and have been trying to shut the plant sooner.

City officials have even gone in front of the State Water Resources Control Board urging that the plant be closed at the end of the year, which was the previously planned closing date.

The terms of the sale do have a few caveats related to how long the plant will be allowed to continue operating.

If AES generates and sells electricity from the site for three more years, the company will pay Pustilnikov $14 million for environmental cleanup. If it operates only for two years, it will give him $6.5 million. The developer would earn just $1.5 million toward cleanup if the plant only operates for one more year.

The agreement between Pustilnikov and AES to preserve up to 25 acres reportedly only comes with the plan to operate the power plant for three years. If the site operates for two years, the number decreases to 12 acres, and at one year it drops to 4 acres. 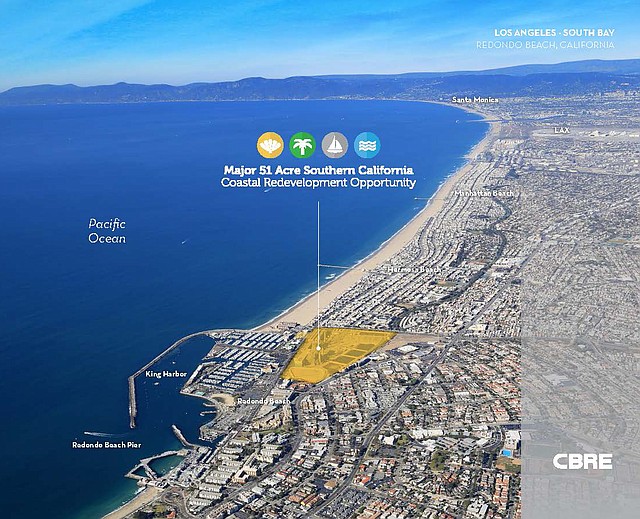 Lustig-Bower was part of a team CBRE put together to understand the approach to developing the site, helping the seller market the property.

Residential, she said, was likely always going to be a part of the site’s development, but creative office space may be a bigger piece than initially planned.

“Creative office space seems to have gotten even more desirable to build than it was when we started working on this,” Lustig-Bower said. “We’ve seen what’s gone on in Culver City and the whole Silicon Beach area. This could be a great opportunity for a creative office component.”

In addition to office spaces, Lustig-Bower said the site would likely have residential and retail components, as well as a hotel. The development may also have a branded residential component along with the hotel.

The development, she said, could be a big boon for the area, similar to the impact The Grove had on the Beverly Grove and Fairfax areas.

“There haven’t been a lot of development opportunities in Redondo Beach. That’s why we haven’t seen as much activity from there,” she said. “It’s primarily a bedroom community, as opposed to downtown L.A. or Hollywood where you have a lot of office buildings and a central business area. When this opportunity came up, we had a big response from the marketplace and a lot of interest in it.”

Depending on the amount of office space created, the site could even offer a break from the long commutes some residents face.

“I’m very excited to see a new development there, and I think it will offer a big benefit to the people that live in the immediate area to work in the office campus that is created or go shopping there,” Lustig-Bower said.

“I think that it will increase the overall neighborhood value in that location and will be a win-win for the community and the developer,” she added.

But Brand said development of the site would likely take a while.

Brand said the site, under current zoning regulations, can only be used for open spaces and utilities, something many people do not seem to understand.

Any zoning changes to allow for development of the site would require a public vote.

“To get what is allowed changed requires a public vote. The public won’t vote for a change unless they see something that benefits them. This is going to be a very public process,” he said.