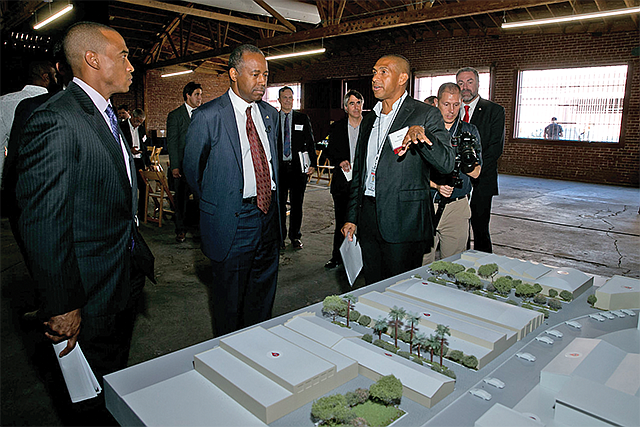 While the legislation isn't easy to understand, investors are jumping in. And some groups are trying to help.

Enter Beehive. The space in South Los Angeles touts itself as the first campus in the country for opportunity zone operating businesses. It is not yet fully operational.

The Beehive was established by SoLa Impact.

“The opportunity zone legislation was fundamentally created to ensure that capital would go to areas that had historically been neglected,” said Martin Muoto, founder and managing partner of SoLa Impact.

SoLa is based in and focuses on South L.A. It is working on affordable housing projects in the area. Muoto said Beehive would “make sure the community received benefits of the opportunity zone legislation.”

The Beehive offers these companies coworking and creative office space, shared amenities and connections to others involved in opportunity zone projects.

“It’s a great example of how people in the community and investors can partner together to really do something to fill a need,” said John Lettieri, chief executive of the Economic Innovation Group and an opportunity zone expert.

The space has more than 100,000 square feet of rentable space across 5 acres in the former home of the Goodyear Tire & Rubber Co. The location, in Florence, is just south of downtown.

This location, Muoto said, is important. Not only is it in a community the group hopes to serve, but the building was also cheaper than comparable properties in other areas.

“If this was in downtown or was in the Westside, we would not be able to afford it,” he said.

The group expects to have 20 to 30 commercial tenants. Some office space will be available at discounted rents to nonprofits and groups serving South L.A. Muoto said SoLa is already in talks with a dozen companies. He is trying to make sure The Beehive is home to local businesses and companies owned by minorities and women.

Lettieri said the businesses could learn from each other and work together.

“Like with any new policy, there’s a learning curve. It’s hard for average business owners and entrepreneurs without resources and a support network to understand how to use it,” he said. “Starting a business is hard to begin with. If you can remove some of that burden, it increases your odds of success.”

“We have to enable economic development and economic opportunity, especially in communities like South Los Angeles,” he said. “No matter how many social programs we run and how many affordable units we build, we are only working on one side of the balance sheet.”

The Beehive, he added, will help SoLa stimulate more activity in South L.A.

“We are going the extra mile to attract and appeal to those companies,” Muoto said. “We hope that this is a catalyst for economic development in the community, and we hope that it has a multiplier effect in the local community and spans other companies and supply chains that serve the broader community.”