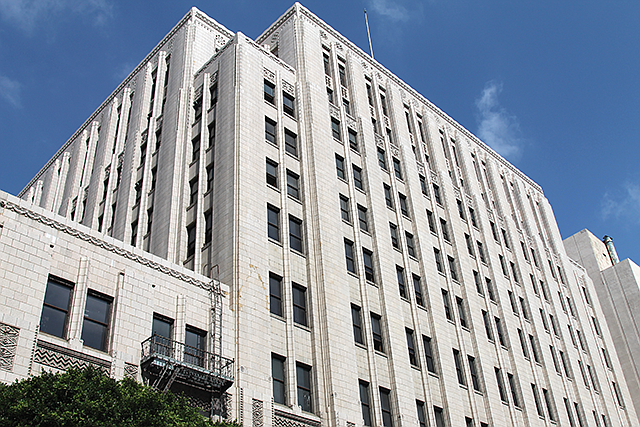 There’s no shortage of construction downtown. Although cranes towering high in the skies may be more noticeable, plenty of historic buildings are also getting a facelift to attract new tenants.

Case in point: The Trust Building. The art deco building was constructed in 1928. The 340,000-square-foot building was designed by renowned L.A. architects John and Donald Parkinson. It previously served as the headquarters of the Title Insurance & Trust Co. The Trust Building, located at 433 S. Spring St., was named a historic cultural landmark in 2003.

It was recently renovated by Rising Realty Partners and Lionstone Investments, who acquired the building in 2016 for $80.4 million. It now has a concierge, outdoor space and a rooftop deck. Gensler served as the building’s repositioning architect. Architectural Resources Group acted as the preservation architect.

“Our goal in restoring The Trust Building was to create a 21st century building that retains its historic character while providing positive technological, social, and environmental impacts to attract thoughtful, creative companies,” said Christopher Rising, co-founder and chief executive of Rising Realty, in a statement.

The first tenant to lease space in the reimagined building is KTGY Architecture and Planning, which will relocate from the group’s current location in Playa Vista in early 2020. The company announced Sept. 20 that it signed a lease for nearly 16,000 square feet.

“This is a building brimming with both history and promise, where we will create a contemporary space that speaks to living and working in Los Angeles,” David Senden, a principal and board member at KTGY, said in a statement. He added that the location would help the company serve clients in the area.

The office will be home to roughly 60 employees. It will have an open floor plan, gathering area and an outdoor deck.