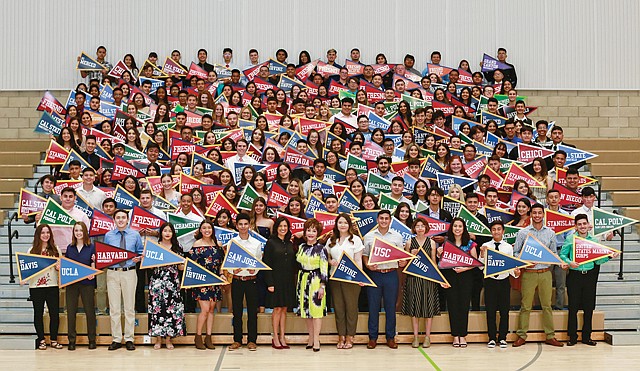 Earlier this year, philanthropist Eli Broad — who ranks No. 6 on the Business Journal’s 2019 Wealthiest Angelenos list with a net worth of $7.4 billion — wrote an op-ed essay for the New York Times announcing his support for a wealth tax for Americans in the top 1%, including himself.

“The enormous challenges we face as a nation — the climate crisis, the shrinking middle class, skyrocketing housing and health care costs, and many more — are a stark call to action,” Broad wrote.

Eli and Edythe Broad’s foundations recently celebrated 50 years of grant-making totaling just over $4 billion, concentrating on public education, scientific and medical research, as well as visual and performing arts. The Broads continued their tradition of supporting medical innovation in 2019 with a $30 million commitment to the Eli and Edythe Broad Stem Cell Centers at UCLA, USC and UC San Francisco.

Still, Broad’s op-ed piece reflects what some among L.A.’s business leaders seem to be recognizing in 2019: a need for the wealthiest to look beyond traditional foundation grants, seek new partnerships, and find new avenues for channeling wealth into solutions for pressing social and environmental issues.

Recent socially conscious efforts on the part of the business community include for-profit investment in technology that addresses sustainability and environmental concerns, said Trevor Neilson, co-founder of Global Philanthropy Group, a Sawtelle-based consulting firm, and chief executive of i(x) Investments, which is based in Los Angeles and New York and is described as a permanently capitalized holding company for investors seeking to combine long-term economic growth with social impact.

Neilson praised Skoll for his efforts to encourage and invest in “social entrepreneurs” and Soon-Shiong’s commitment to address critical health issues through new biotechnology.

Of Musk, he added, “Elon Musk is the single most admirable business leader in L.A. as it relates to social impact,” for harnessing the power of entrepreneurship to address the climate emergency through the development of the Tesla and proposals for rapid transportation options. “Does he give to LACMA? Who cares?”

Marc Nathanson (No. 38 at $2 billion), chairman of Mapleton Investments in Beverly Hills, and his wife Jane did gift $50 million in modern and contemporary art to LACMA in 2015, but he also has espoused the profit-for-good philosophy in launching Falcon Waterfree Technologies, which produces water-free urinals, in 2000. Skoll is a major investor in the company. While Falcon is a for-profit enterprise, Nathanson said the company has donated its technology to hospitals and other nonprofit institutions and efforts.

Last year’s local philanthropy saw many of L.A.’s wealthiest making significant donations to new and existing arts institutions. Lynda and Stewart Resnick (No. 7 with a net worth of $6.8 billion), owners of Wonderful Co., for example, donated a $30 million lead gift for the renovation of the Hammer Museum at UCLA in Westwood.

Other benefactors chose to give to the Academy Museum of Motion Pictures, now slated to open sometime in 2020 on Museum Row. Entertainment executive David Geffen (No. 4 with a net worth of $9.2 billion), was an early donor to the Academy Museum, adding $25 million to the project in 2013.

Adam Fowler, director of research for Beacon Economics in Westchester, said the flurry of arts activity arguably has pushed Los Angeles into the company of East Coast cities such as New York and Boston when it comes to cultural investment. Still, Fowler said, “because the tax structure at the top is a little looser (in recent years) than it has been, folks are taking on a lot of different issues. … Where that money (earlier) may have been sent to the federal government via an estate tax, folks are now investing in various nonprofits that are socially conscious.”

Geffen, who like Nathanson has directed his philanthropy to health care, medical education and other efforts, focuses on partnering with organizations. His 2018 donations totaled more than $38 million to public charities, including for civil liberties, the Jewish community and HIV/AIDS prevention, along with arts institutions in New York and Los Angeles, such as the Los Angeles County Museum of Art.

“My approach to philanthropy has generally been one of identifying unmet needs in the community and exploring how I can partner with nonprofits to help address those needs,” Geffen said in an email.

L.A. real estate developer Rick Caruso (No. 10 with a net worth of $5.7 billion) is also involved in community partnerships. In 2013, through the Caruso Family Foundation, the executive made a $5 million commitment to launch Operation Progress, focusing on education and health care in South Los Angeles. In partnership with SCS Noonan Scholars, the Caruso Scholars program has helped 85 low-income students attend prestigious four-year colleges and expects that number to surpass 100 in 2019.

Wonderful Co. targets much of its social impact efforts in California’s Central Valley where many of the agriculture company’s employees live and work. “We call it the heart in Wonderful,” Resnick said. “I have a very focused approach to philanthropy: I want my philanthropy to change the power paradigm of poverty in the Central Valley.”

In addition to the $600,000 in awards to Central Valley nonprofits — including hospitals, food banks, youth groups and arts organizations — in 2019 the Resnicks announced that they gave $2 million to UCLA for the Lynda and Stewart Resnick Endowed Chair in Art.

In a recent interview, Lynda Resnick said Los Angeles can expect another “huge” philanthropic effort in the near future but an announcement would be premature. “These things take a long time to cook,” she said with a laugh.