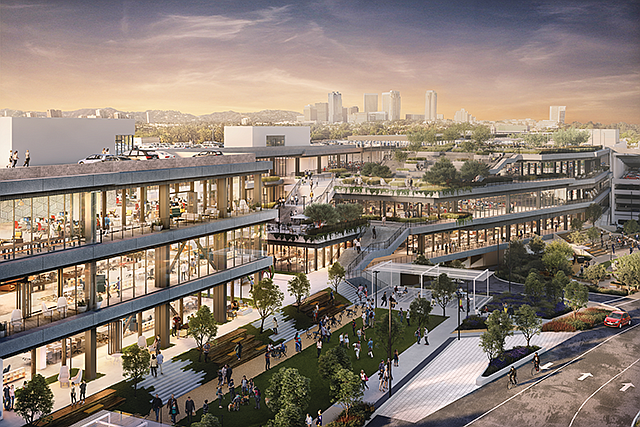 Taking Over: Google holds a lease for the Westside Pavilion development.

Move over media, there are bigger players in town now.

For the first time, technology and coworking companies have overtaken media and entertainment businesses as the top drivers of leasing volume in greater Los Angeles, according to a report from brokerage Cushman & Wakefield Inc.

Eric Kenas, market research director for Cushman & Wakefield, said many tech companies from the Bay Area are making L.A. a second home, which is driving the increase.

“There’s a lot of tech-based companies that seem to be growing at a rapid pace,” he said, adding that many of those leases are large.

Technology leasing numbers this year were driven by Google. The tech giant signed a lease in early 2019 for the 584,000-square-foot Westside Pavilion redevelopment.

The project, from developers Hudson Pacific Properties Inc. and Macerich Co., will convert part of the mall into creative office space. Google signed a 14-year lease and is expected to occupy the building in 2022.

On the coworking side, WeWork Cos. Inc. has been on a leasing tear. In July, the group announced it signed a lease for more than 135,000 square feet at the Wilshire Courtyard in Miracle Mile, which will mark the company’s 30th location in L.A.

Kenas said he expects coworking and technology companies to continue to sign large leases. He also expects to see companies that work with some of the tech giants that have recently signed leases to follow suit and put down roots in L.A. as well.