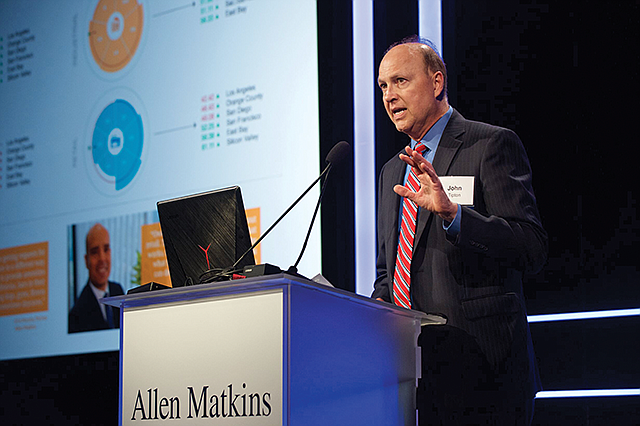 A possible recession, foreign investment, a new stadium, the importance of public transit near developments and the hot industrial market ranked as main topics for both panelists and attendees at the annual Allen Matkins Leck Gamble Mallory & Natsis View from the Top conference.

One of the city’s most highly regarded real estate events, the conference took place Sept. 9 at the Beverly Hilton in Beverly Hills. A crowd of nearly 500 brokers, developers, attorneys and investors attended. CBRE Group Inc., Kilroy Realty Corp. and Boston Properties Inc. were among the companies represented.

Of the many topics covered, these three key takeaways from the event stood out:

One of the area’s biggest projects is also one of the most anticipated, judging by the level of interest and discussion at the conference. The Los Angeles Stadium and Entertainment District at Hollywood Park will be the home of the National Football League’s Los Angeles Rams and Los Angeles Chargers, hotels, residential units, retail, offices, and a performance venue.

Marlene Nations, senior vice president and general counsel for LASED, called the project a “once in a lifetime opportunity.”

Nations, who served as outside counsel for LASED when the company acquired the land for the project in 2014, joined the organization less than a year ago.

She said there are 3,000 workers a day at the site. Although there have been some complaints, such as dust in nearby areas, Nations explained that the city and the project’s neighbors have been largely supportive.

Jason Gannon, a managing director at LASED, was also at the conference. He said he hopes to announce partnerships and events for the stadium in the next few weeks.

The stadium is expected to open in the summer of 2020.

Impact of a possible recession

How will L.A.’s real estate market fare if a recession hits? That seemed to be the question on the minds of many conference attendees, but speakers and panelists didn’t always share their concerns.

“It was generally positive,” Tipton said of the report’s findings. “We stayed strong in the industrial sector; the office sector is showing some rebound; the retail sector, which has been so hard hit, is showing some signs of life.”

The market is expected to slow slightly in 2021 before picking back up in 2022.

“People think we are due for a correction, but buildings are trading,” said Laurie Lustig-Bower, an executive vice president at CBRE.

“Everything is pretty healthy,” said Jonathan Lange, a vice president at Boston Properties. “The fundamentals seem strong across the U.S.”

Chinese companies, which until recently were major investors in the U.S. real estate market, have stepped back in the face of China’s crackdown on capital outflow and the ongoing trade war. As a result, many Chinese assets in L.A. have been sold.

Michael Van Konynenburg, president of Eastdil Secured, said during an economic overview session that Asian investment was down 30% last year and 20% so far this year.

“Asia continues to be an important source of capital, but there is much less deal flow,” Van Konynenburg said.

Kevin Shannon, the co-head of U.S. capital markets at Newmark Knight Frank, said foreign capital is still important in real estate. Some of it is moving into secondary markets as prices in top areas rise.

From his standpoint, Shannon added, corporate debt and China were the two major factors to keep an eye on.