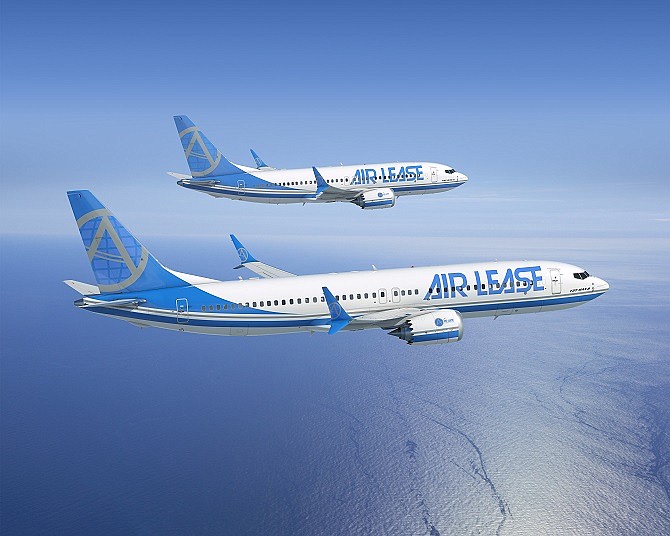 The company had 154 Max planes on order for its airline customers and 14 Max planes in its possession — none of which could be delivered to customers.

Chicago-based Boeing’s Max planes remain grounded, likely for the rest of this year, as the company and the Federal Aviation Administration review the plane’s systems and ensure they are safe to resume flights.

But Air Lease appears to have ridden out the crisis with minimal impact and has even benefitted slightly through higher lease rates for some of its other planes.

While lease payments have been delayed as Air Lease waits to deliver Max planes ordered for its customers, airlines haven’t scrapped their Max lease plans as initially feared, and they haven’t dialed back orders for other planes.

“The grounding of the 737 Max has given airlines a healthy opportunity to pause, reevaluate, and reconfirm their fleet replacement and growth requirements, and we do not see any evidence of an overall pullback in aircraft demand,” Air Lease founder and Executive Chairman Steven Udvar-Hazy told analysts during the company’s Aug. 8 earnings conference call.

As a result, lease payments on Max planes are expected to pick up once grounding orders in the United States and across the globe are lifted, which is expected early next year.

“The revenue is not permanently lost, but delayed,” said Scott Valentin, analyst with Compass Point Research & Trading in Washington, D.C.

Air Lease, founded in 2010 by aircraft leasing pioneer and local billionaire Udvar-Hazy, buys planes from manufacturers such as Boeing and leases them to its airline customers, providing carriers with an affordable alternative to buying planes outright. An airliner can often cost more than $100 million.

As the Boeing Max grounding has dragged on, Air Lease has benefitted from airlines’ increased leasing of other aircraft. Chief Executive John Plueger told analysts on the earnings call last month that aircraft orders from airlines total $5.1 billion year to date, more than 50% ahead of last year and the highest six-month total in the company’s history.

Because of delays in receiving the Max planes and planes from rival manufacturer France-based Airbus, several customers have stepped up orders for alternative single-aisle “narrowbody” aircraft, such as the Airbus A321neo, he added.

“The shortage created by the Max grounding and the Airbus delivery delays have, if anything, strengthened near-term single-aisle demand, and we have seen an uptick in certain lease rates,” Plueger said. He declined to respond to an analyst’s question about how much lease rates have increased.

The timing of the Max grounding may actually have helped the overall aircraft leasing market, according to Moshe Orenbuch, a New York-based analyst with Credit-Suisse.

Prior to the grounding, there were concerns about an oversupply of aircraft driving down lease rates, Orenbuch said in an email. The grounding and resulting scramble for aircraft to maintain light schedules “has caused a newer generation of lease rates to improve,” he said.

Plueger told analysts that in another step to blunt the impact of the Max crisis, the company converted an order from Boeing for 15 Max planes to five 787 Dreamliner planes that can be placed more quickly with its customer airlines.

The lack of cancellations for Max planes, robust orders coming from aircraft buyers and the company’s order conversion have propelled a rebound in Air Lease stock from a low of $32 a share immediately after the Max grounding in March to a high of $43 a share on Aug. 9. The share price closed at $41.46 on Sept. 4.

Investors are banking on Max flights resuming by the end of the first quarter in 2020, which would mark almost one year since the grounding. If the grounding extends longer or becomes permanent, Air Lease would have to negotiate with Boeing to recoup lost leasing income or offset canceled orders.

In its order contracts with Boeing, “Air Lease reserves the right to recoup any economic and monetary damages inflicted by the Max delivery delays from Boeing,” analyst Valentin said in his Aug. 9 report on Air Lease.

Air Lease investors are monitoring the economic slowdown in Europe and Asia. If it cuts into air travel, airlines might delay or cancel orders, Valentin said in the report.

CORRECTION: An earlier version of this story misidentified the company Helane Becker works for. She is an analyst with Cowen Inc.