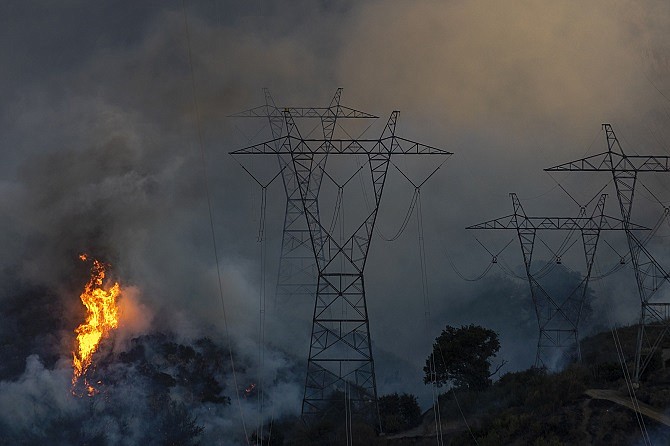 Flames heat up high power lines at the Saddleridge Fire on Oct. 11, 2019. The fire has spread to more than 8,000 acres and burned at least two dozen homes

A Southern California Edison transmission tower in Sylmar located near the Oct. 10 ignition point for the 8,300-acre-plus Saddleridge Fire is under investigation as a cause for the blaze that destroyed or damaged more than 90 structures and was tied to two deaths, SCE officials confirmed Oct. 15.

“Out of an abundance of caution, we notified the California Public Utilities Commission on Friday, Oct. 11, that our system was impacted near the reported time of the fire,” SCE spokeswoman Mary Ann Milbourn said in a statement.

Southern California Edison is the utility subsidiary of Rosemead-based Edison International. It provides electricity to 15 million people in 180 cities in all or part of 15 counties throughout Southern and Central California through a grid that contains more than 12,000 miles of high-voltage transmission lines and 91,000 miles of distribution lines.

If investigations into the Saddleridge Fire determine Edison equipment triggered the blaze, this would likely be the utility’s first dip into a statewide wildfire fund signed into law this summer that would limit the company’s liability.

Under that compromise, SCE ratepayers are contributing $3 billion toward the fund and the company is contributing another $3 billion. SCE must also spend nearly $2 billion to make its transmission grid more resistant to fires.

SCE’s statement cited multiple reports that the Saddleridge Fire started at about 9 p.m. on Oct. 10 near the intersection of Yarnell Street and Saddle Ridge Road in Sylmar and quickly spread along the northwestern rim of the San Fernando Valley.

Although the statement itself did not reference the type of SCE equipment near this start point, several news outlets have reported that an SCE high-voltage transmission tower was within a couple hundred yards of this point, at the intersection of Yarnell Street and the 210 Freeway.

The blaze burned unchecked for nearly 24 hours, driven by Santa Ana winds gusting up to 50 miles per hour. After the winds died down, firefighters were able to make progress and by midday Oct. 15 had established containment lines around 45% of the fire.

According to the Los Angeles Fire Department, as of Oct. 14, the fire had destroyed 17 structures and damaged another 77 and was tied to two deaths by heart attack: one of a homeowner fighting the blaze with a garden hose and the other of a park ranger patrolling areas near the burn zone. Nearly 100,000 people were forced to evacuate during the height of the fire early in the morning of Oct. 11.

The Los Angeles Fire Department is continuing its investigation of the cause of the Saddleridge fire. Now that the PUC has SCE’s report, the agency will also begin an investigation. It could take more than a year for the investigations to conclude.

A yearlong investigation ultimately found that SCE equipment sparked a portion of the December 2017 Thomas Fire that scorched more than 280,000 acres in Ventura and Santa Barbara counties. And the cause of the November 2018 Woolsey Fire is still under investigation. Edison faces up to $4 billion in liabilities from the Thomas Fire alone.

“The company’s top priority is the safety of customers, employees and communities, which is why we continue to enhance our wildfire mitigation efforts through grid hardening, situational awareness and enhanced operational practices,” SCE’s Milbourn said in the statement.

The same Santa Ana wind event also spread another fire in Calimesa in western Riverside County that burned into a mobile home park, damaging or destroying 76 homes there and causing two deaths. While that fire burned through territory served by SCE, preliminary assessments attributed the cause of that blaze to burning trash discarded from a garbage truck.