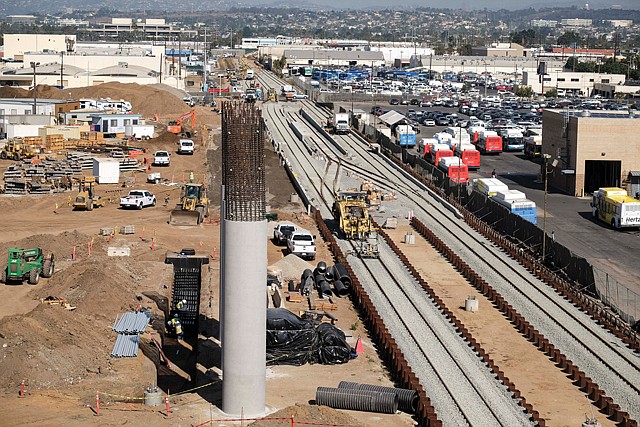 On the Right Track: A Metro train station under construction near LAX.

The construction sector has been driving overall employment growth in Los Angeles County over the past year, and a significant part of that gain is related to the billions of dollars flowing into infrastructure investment.

The latest recap and outlook from Westchester-based Beacon Economics, released Oct. 2, compiled state jobs data to show a 6.5% gain in construction employment in L.A. County between August 2018 and August 2019.

The sector added 9,600 jobs for a total of 158,000 during that time, far outpacing the overall 1.3% gain in payroll employment for the same period.

Heavy and civil engineering construction — the category most closely associated with infrastructure — was not far behind with an employment gain of 6.5% between August 2018 and August of this year.

“There is no doubt that public infrastructure construction activity is contributing to total job counts,” recap author and Beacon economist Robert Kleinhenz said in an email.

Kleinhenz cited such major projects as the $14 billion modernization of Los Angeles International Airport, rail expansion projects by the L.A. County Metropolitan Transportation Authority, and port projects, such as the $1.5 billion Gerald Desmond Bridge replacement at the Port of Long Beach.

As for the types of construction contractors seeing the most growth in employment, the Beacon report said the biggest increase was logged at specialty trade subcontractors, including concrete pourers, plumbers, electrical contractors and painters. That category added 6,200 jobs between August 2018 and August of this year, for a total of 102,000.

But Kleinhenz injected a note of caution into these robust job growth figures. He said these figures represent investments that developers and public agencies committed to a year or two ago and that in these more uncertain economic times, there’s some evidence investment may be slowing.