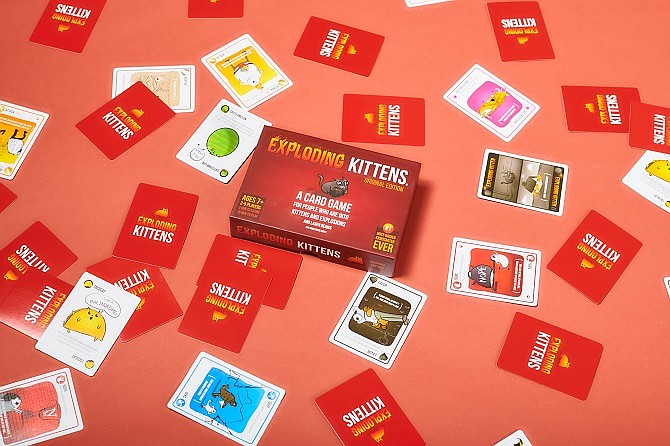 The creators of the Exploding Kittens card game sold a $30 million stake in the company behind the feline-inspired game to ex-News Corp. executive Peter Chernin.

Chernin’s TCG Capital announced that it acquired a minority stake in the Fairfax-based tabletop game company founded in 2015 by former Xbox designer Elan Lee and comics writer Matt Inman. Details of the deal were undisclosed, but Chernin’s profile raises the possibility of film or TV tie-ins.

“We have been talking about it," Inman said. "It feels like a natural direction. We have a game with a bunch of characters, but none of them have a place to live.”

Inman said the company plans to use the funds to launch its first gaming convention, “Burning Cat,” next year complete with a 20-foot-tall feline. The company will also use the funds to hire more humorists and artists as it ramps up production from one new game a year to between three and five.

The game was originally known as Bomb Squad, but the company changed the game's name to Exploding Kittens as a nod to the ubiquitous cat-related content online.

The founders launched the company by raising $8.7 million on Kickstarter for their game. Since then, the eponymously named company has created four other games, including Bears vs. Babies and You’ve Got Crabs.

The idea behind Exploding Kittens is simple. Players take turns drawing cards until someone draws an exploding kitten and loses the game. The deck is made up of cards that let you avoid exploding by peeking at cards before you draw, forcing your opponent to draw multiple cards or shuffling the deck.

Chernin is betting Exploding Kittens can capitalize on the anticipated growth of the board games market, which is projected to reach more than $9 billion in 2023, according to the game company.