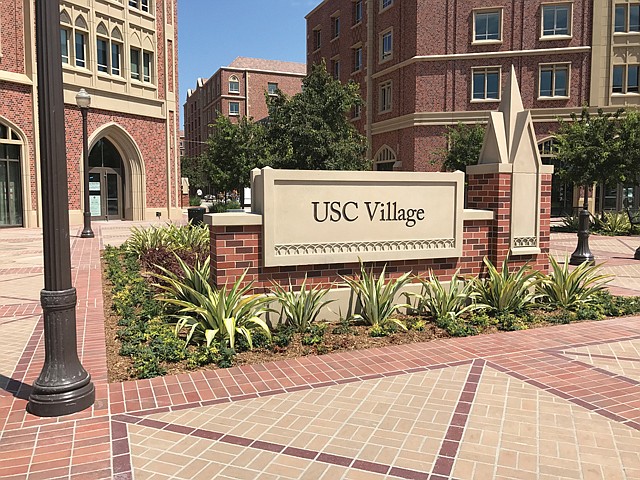 Beautiful Friendship: Linespace has worked with USC for more than a decade, including on the development of signage for USC Village.

Downtown-based Linespace has put its signature, or rather its signage, on multiple megaprojects across the region.

Launched in 2003 by partners Nick Groh, Clint Woesner and Max Beach, the design studio has found a specific niche designing signs and graphics for major projects.

“We are a brand experience company that focuses on core messaging for brands through design solutions including signage,” Woesner said.

Linespace has worked with USC for more than a decade, including helping with the campus rebrand, the USC Village project and the Health Sciences Campus, which Woesner said was about “giving people that sense of arrival.”

The studio also worked on a student fitness center at UCLA and the Cal Tech Gates-Thomas Library.

Linespace moved its offices from Culver City to downtown about five years ago to be closer to USC and downtown-based architecture firms.

At 255 Grand, near the Broad museum, the group created signs and graphics for a remodel.

Linespace is now working on Brookfield Office Properties Inc.’s planned residential tower next to the FIGat7th shopping mall. When completed, the 64-story building will have nearly 800 apartments.

The studio is brought into projects at various stages by developers, architects and owners.

“Sometimes it’s better when we’re brought in later because the design isn’t moving around as much,” said Andrea Lee, senior designer at Linespace.

Sometimes, though, coming on later means Linespace has to do some problem solving. “Signage and graphics are something they forget about,” Woesner said.

For the Brookfield project, Linespace was brought on very early.

Beyond L.A., the company has provided signage for Kilroy Realty Corp.’s One Paseo retail project in San Diego, Santa Clara County Parks and the Forum Carlsbad.

While some companies prefer to do graphics and signs in house, Woesner said there are benefits to outsourcing to a firm like Linespace instead.

“The advantage of using an outside firm is we bring a different viewpoint that can add to the success of the project,” he said.