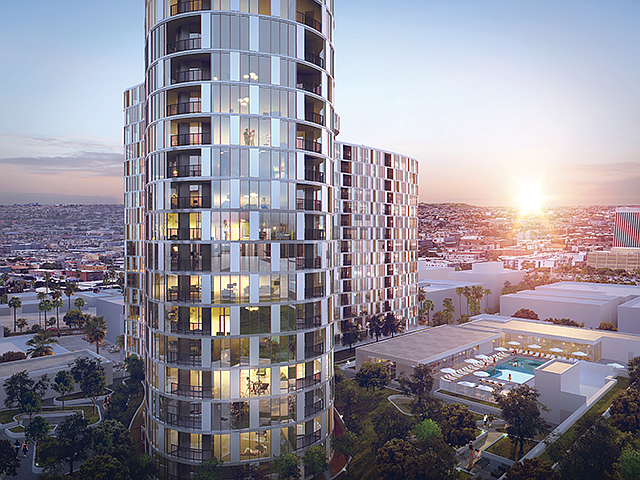 Koreatown Expansion: 2900 Wilshire Blvd. is one of 15 Jamison projects under construction.

Lee runs Koreatown-based Jamison’s development arm, which is focused on multifamily properties. The group recently completed 1,600 apartments and 100,000 square feet of retail and has 15 projects under construction.

Service-based amenities. Rents are so expensive today that apartment management companies need to provide luxury services to attract and retain residents so that the resident feels like they’re getting their money’s worth.

Location is the most important part of a development. L.A. needs to focus on becoming more transit-oriented to decrease its environmental impact and improve the quality of life for its residents. We build in dense urban environments with great walkability and amenities as well as immediate access to jobs and businesses.

What is the most interesting project you’re working on?

Our most interesting project is at 2900 Wilshire Blvd. It is a 644-unit mixed-use building that sits on the eastern border of Koreatown facing Downtown L.A. at the corner of Wilshire Boulevard and Hoover Street, where the American street grid meets the Spanish street grid. The high-rise component of the project will have unobstructed views in all directions, some of which overlook Lafayette Park.

Cityview was founded in 2003 and has generated more than $4 billion in investment across more than 100 projects.

Our goal is to build housing in a way that makes sense. We look at where people want to live and how they want to live and create a product that fills their needs. Accessibility to jobs, culture, restaurants and transit is critical. We also look at construction type, unit finishes, unit sizes and amenities to determine what will be attractive to the market and at what price point.

What submarkets are hot now?

There are several hot L.A. markets, including HiFi (Historic Filipinotown), Culver West and Highland Park for value-add. We also think Marina del Rey is interesting because of its proximity to Playa Vista, the new development going on there and the value-add deals we are starting to see trade. The West Adams area is also transitioning.

We are in predevelopment on two sites in opportunity zones, one in Los Angeles and the other in Oakland. We saw this legislation evolve over the past two years and tracked it closely, so it is exciting to actually get to apply it to a physical project. Opportunity zones present a unique opportunity for us to do what we do: develop multifamily assets in markets we believe in, but with a new base of investors.

Wallace has been working in commercial real estate since 1997. She has closed more than 350 transactions that exceed $2 billion in value over the course of her career.

The lack of it. We need more affordable, not subsidized, multifamily units that the average citizen can comfortably put into his or her budget. It’s simply a question of supply and demand. The less supply coupled with increasing demand only drives prices up.

Developers cannot seem to build (enough) new multifamily housing units. Call it mission creep or whatever term you wish to use, but as previously favored neighborhoods fill, other submarkets, long in need of upgrades in housing, are becoming the favored target of investors and builders.

What submarkets are hot now?

When it comes to multifamily in Los Angeles, what submarket isn’t? Downtown, East Hollywood, Inglewood with its new football stadium, Hollywood, West Hollywood and Culver City. On the east side, South Gate, Paramount, and Long Beach.

Lustig-Bower has been in the industry for more than 30 years. She has done more than $9 billion in multifamily sales in L.A. in the past decade.

Developers are focusing on building smaller unit sizes coupled with providing more amenities and security for the tenants. From a construction point of view, developers are trying to find ways to build less expensively in order to make their projects financially feasible due to the recent run-up in construction costs, especially for subterranean parking. We are seeing more buildings being designed with above-grade parking to avoid building subterranean.

The next big trend appears to be designing buildings with less parking. The thought is that a growing percentage of the population won’t need their own car given the growth of ride-share services, improved public transportation services and the continuing popularity of live-work-play projects. Some design changes I anticipate are designing garages that could one day be converted to other uses if the parking is no longer needed and also the creation of designated areas for drop-off and pick-up for services such as Uber and Lyft.

We sold 11600 Santa Monica Blvd. in West Los Angeles. Blue Wave Car Wash had been the tenant at this property (which) was sold to be redeveloped into an apartment building with approximately 100 units. The market responded very strongly to this site, with more than a dozen developers competing for the property.

Rogers has sold more than 5,250 units accounting for $1 billion in volume.

It’s the co-living operating model. Co-living seems to be gaining momentum in markets like L.A. where, due to a lack of significant housing development, there is a real affordability problem. In the current economy where sharing has become the norm, co-living provides an acceptable and more affordable alternative to the youngest renter demographic.

The implementation of smart-home technology. We are seeing more and more units include lights, shades, locks, etc., controlled by smart speakers with cutting-edge applications. As owners look to differentiate themselves from the competition, and the technology gets better and even more efficient, we believe this trend will continue.

What is your outlook on real estate for the next 6-12 months (vacancy, rents, etc.)?

All is good! Most resources tell us that rent growth in the higher supply submarkets (Hollywood, DTLA) will be muted, but absorption will be steady, and occupancy should remain strong. Rent growth in the B and C space should continue to outpace the luxury market as luxury units are the vast majority of what is being built. The outlook for Los Angeles is very bright, and the Los Angeles multihousing market should deliver durable long-term cash flow given the housing shortage and strong demand drivers.