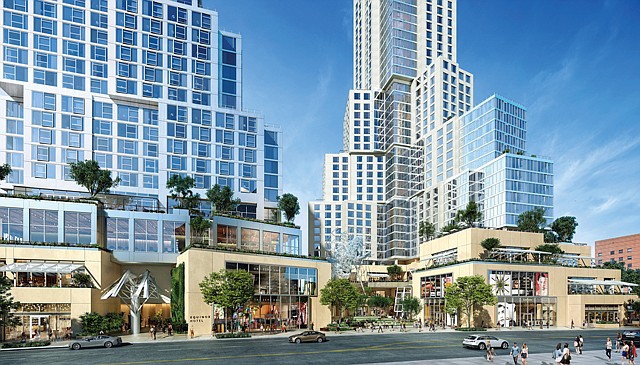 The Grand at 130 S. Grand Ave. is a mixed-use project being developed by Related Cos. It will have more than 400 units.

Those cranes that have become a fixture of the downtown skyline aren’t going away anytime soon.

At the same time, average rents in the area have increased a mere 1% compared with an 8% increase citywide, according to the Downtown Center Business Improvement District.

“We’re delivering a record number of units, but over time, downtown is able to absorb them,” said Nick Griffin, executive director of the DCBID.

Projects that have been on the market for a year are already seeing occupancy rates of 90% and higher, he added.

“The market remains strong downtown,” said Laurie Lustig-Bower, an executive vice president at CBRE Group Inc. “We would expect that even with the buildings that they are forecasting to build, that are coming on, that the market would absorb them.”

During the third quarter, there were 5,744 residential units under construction and an additional 33,315 units proposed, according to DCBID data. Griffin said roughly 1,200 units would open by the end of the year.

“Across the city and the region, rents continue to rise because of the shortfall of supply,” he said. “Downtown L.A. is a perfect case study of what happens when you deliver more supply.”

Brokers expect the units coming online to be filled quickly.

Lustig-Bower said there is a severe shortage of units compared to the workforce in downtown, adding that the large number of units in the works would likely be absorbed.

In the third quarter, 79 units sold for an average price of $690 per square foot, compared with 99 units for $723 per square foot the same time the previous year, according to DCBID data.

“The condo market is a little bit of an anomaly downtown,” Griffin said. “My prediction is that the property to watch is Perla, which is nearing completion on Broadway and 4th.

Perla is the first large-scale project which is really targeted to the middle of the market.”

Other condos such as Greenland Group’s $1 billion Metropolis project, he said, are higher priced.

“It’s a little bit on the higher end than what the downtown market is ready for. Three years from now, I think that will be right in the sweet spot,” Griffin said.

Lustig-Bower cautioned against reading too much into downtown condo stats.

“There are a lot more old condos that have sold which can pull down the average cost,” she said.

Newer buildings, she added, are going for higher prices per square foot.

But they aren’t all selling. Metropolis’ final tower will be an apartment complex and not condos as previously announced. Three different brokerages have been enlisted to sell condo units at Metropolis’ other towers.

“The majority of our clients have been building apartments because the rent per square foot and the cap rates you can get to build the apartments is better,” Wallace said.

Looking forward, she expects to see more condos being built due to rent control regulations that recently passed in the state.