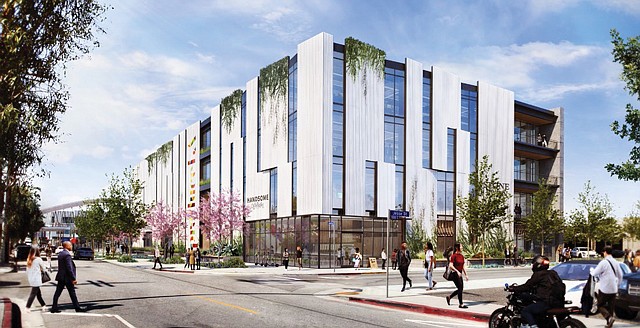 Construction work is heating up in the Arts District to keep pace with the high demand for office space in the area.

Produce LA, an office development at 640 S. Santa Fe Ave., is one of the latest projects to receive construction financing.

The development received a $54 million, three-year loan from an undisclosed lender. The financing is subject to a floating rate with two one-year extension options. It is also subject to full-term, interest-only payments.

Produce LA will have 113,600 square feet spread over four stories. In addition to office space, there will be restaurant and retail spaces on the ground floor and a rooftop terrace. The office space is being designed to cater to either one tenant or multiple tenants. Two levels of underground parking and an adjacent surface lot also are planned.

The project, which sits in an Opportunity Zone, is being developed by Continuum Partners.

The site is near other well-known projects in the area including Soho Warehouse, a membership club by Soho House Group at 1000 S. Santa Fe Ave.; The Maxwell, a project by Hudson Pacific Properties Inc. that is home to a WeWork Cos. Inc. location; and Warner Music Group Inc.’s L.A. headquarters, which its parent company purchased recently for $195 million.

The Produce LA site is also located near the upcoming Sixth Street Viaduct project, a new bridge and a 12-acre park.

In the third quarter, the office vacancy rate downtown was 15.8%, down from 16.3% the previous year. The asking rate for Class A office space was $3.87 a square foot, up 29 cents over the previous year, according to data from Jones Lang LaSalle Inc.