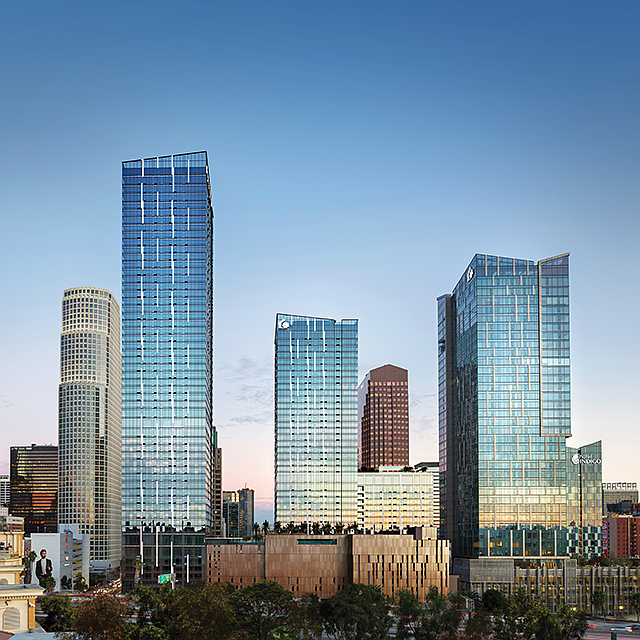 Opening Days: Tenants will be able to move into downtown’s Metropolis apartment and condo complex in January.

While construction is gearing up for multiple projects downtown, it has just concluded for one of the area’s biggest developments.

Work has wrapped on the $1 billion

“It’s a really important milestone for downtown as a whole and for the Financial District,” said Nick Griffin, executive director for the Downtown Center Business Improvement District.

“Metropolis was one of the first real megaprojects to break ground in DTLA,” he added. “Its completion really validates the scale of the project and the global interest and confidence that’s behind it in terms of the future of DTLA.”

Griffin said that while there is extensive development throughout downtown, Metropolis is one of the only projects in the Financial District.

Metropolis’ final tower will be an apartment complex and not for-sale condominiums as previously announced.

“Greenland does a great job watching the market,” said Greenland Vice President of Sales and Marketing Kimberly Lucero. “There’s been such a demand down here for condos and apartments that they decided to diversify to meet the housing demand.”

Griffin said the move from condos to apartments was a “savvy, strategic decision about what to do with that tower.”

“It’s a response to the strength of the rental market,” Griffin said. “As the occupancy rate has gone back up again into the 90s, it makes rentals all that much more attractive from an investor standpoint.”

Griffin added that units can be leased faster than they can be sold in the current environment, especially at the high price point for Metropolis units.

Greenland Group has had some trouble filling the other towers, which have more than 800 condos combined. Three different brokerages have been enlisted to sell the units. Polaris Pacific recently replaced The Agency, which had previously replaced Douglas Elliman Real Estate.

Griffin said the units are more expensive than other condos downtown, and there are a lot of them.

“It’s more challenging to sell at the higher end of the market, partly because the downtown condo market hasn’t proven itself at a scale at that price point just yet,” Griffin said. “But I would make the case that that’s where the market is going.”

The completed apartment tower, dubbed Thea at Metropolis, has 685 units. Greystar Worldwide will manage the property, which is located at 1000 W. 8th St.

Greenland received a $310 million construction loan in 2018, arranged by Cottonwood Group and Natixis.

Lucero said there was no information available yet on rental pricing, but Greenland was taking applications for the units. Residents, she said, can start moving in

Metropolis, which was designed by Gensler, is comprised of three residential towers and a fourth tower that is home to the Hotel Indigo. Metropolis also has nearly 70,000 square feet of retail.

Retail tenants for the residential towers are expected to be announced soon. Lucero said it would be a mix of tenant types including local and national companies.

She said Metropolis’ location and amenities — including a clubhouse, pool and pet spa — are attracting people to the building.

“Our amenities can’t be beat,” she said. “They are among the best in all of L.A., and the views are spectacular.”

Greenland bought the Metropolis site for $150 million and started construction in 2014. By the time construction began, the project had been in the works for nearly 30 years. During that time, the developer tied to the project changed.

For Shanghai-based Greenland Group, the project was its U.S. development debut. At the time, a handful of Chinese companies were betting big on the L.A. market. Then the Chinese government cracked down on spending on U.S. real estate and capital flow.

Many properties and development sites of Chinese companies were put up for sale, including parts of the Metropolis.