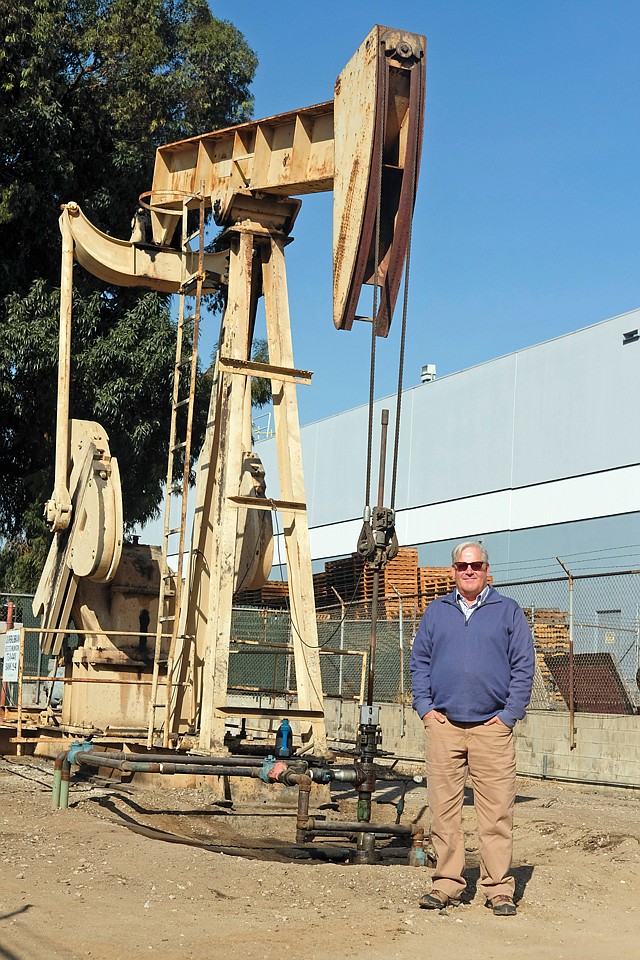 Pumped Up: Jeff Cooper’s family has been in oil since 1933. Photo by Ringo Chiu.

They have been so prevalent during Cooper & Brain’s 65-year history that the company has developed a strategy to cope: Put away some of the profits during the good times, then tap those reserves to stay afloat when the rough times hit.

It’s one reason why Cooper & Brain survived the last downturn, from late 2014 through 2016, when other oil companies — such as downtown-based Breitburn Energy Partners — faced bankruptcy.

“We came through that downturn with only a little belt-tightening and without having to shut down a single well,” Cooper said. “We were operating some wells at a loss when prices were so low because we had that reserve we could tap into.”

Cooper & Brain has seven full-time employees in its Wilmington headquarters, and another 50 or so people work at companies that Cooper & Brain contracts with for oil field equipment and services.

Keeping its 49 wells in southern Los Angeles and northern Orange counties operating is crucial: If the company shuts down a well for more than one year, it has to renegotiate mineral rights with neighboring property owners and wade through a raft of regulatory approvals to restart the well.

But now a threat looms that could upend Cooper & Brain’s carefully crafted survival strategy — a proposal in the city of Los Angeles to expand zones where oil drilling would be banned.

Depending on how the ordinance is crafted, the company could be forced to shut down most — and possibly all — of its wells in the city.

Cooper & Brain has 22 operating wells within Los Angeles city limits, and Cooper said those wells account for more than two-thirds of the company’s revenue.

Given how difficult it is to get oil wells approved in California, trying to offset that lost revenue by opening new wells is not likely to prove a viable strategy.

“This is an existential challenge to the survival of our business,” Cooper said.

Under current city law, all operating wells must have a buffer zone of at least 200 feet from homes, schools, hospitals and other key facilities. In general, wells are not allowed to operate within that buffer zone.

In July, city Petroleum Administrator Uduak-Joe Ntuk proposed expanding the buffer zone to 600 feet for existing wells and 1,500 feet for new wells. Environmental and community activists are pushing the City Council to adopt a buffer zone of at least 1,500 feet for all wells.

The Council is expected to take up the proposal within the next few months.

Cooper said a 600-foot buffer could force him to shutter up to 20 of the company’s 22 oil wells in the city, depending on the requirements in the final ordinance language.

“If they go out to 1,500 feet, then it’s pretty certain we would have to shut down all our wells in the city,” he said. “And if that were to happen, there goes two-thirds of our revenue with no obvious way to replace it.”

Cooper & Brain is not alone. According to data from the California Division of Oil, Gas and Geothermal Resources, there were 772 operating wells in Los Angeles in 2017; those wells are operated by dozens of oil companies.

One of those companies is Bakersfield-based E&B Natural Resources, which operates about 100 wells in the city of Los Angeles.

Layton said that if the city’s buffer zone expansion were to force the company to shutter wells, E&B would likely seek compensation from the city for the loss of the use of its assets.

But for E&B, Layton said, the Los Angeles oil wells only account for about 17% of the company’s overall production, which includes oil fields in Kern County, Kansas, Louisiana and Wyoming.

That’s unlike Cooper & Brain and its heavy reliance on production in Los Angeles. Cooper said that even before the company was established, his family was in the oil business — going all the way back to 1933.

What hurts the most, Cooper said, is that the company never sited its oil wells and related facilities near homes, schools or any other sensitive land use areas.

“In most cases, when the wells were drilled back in the ’30s, ’40s or ’50s, we were here first,” Cooper said. “There was nothing but open fields as far as the eye could see around most of our wells in Los Angeles. The development came in later — all approved by the city at the time. Now we are the ones who will have to shut down and quite possibly go out of business.”