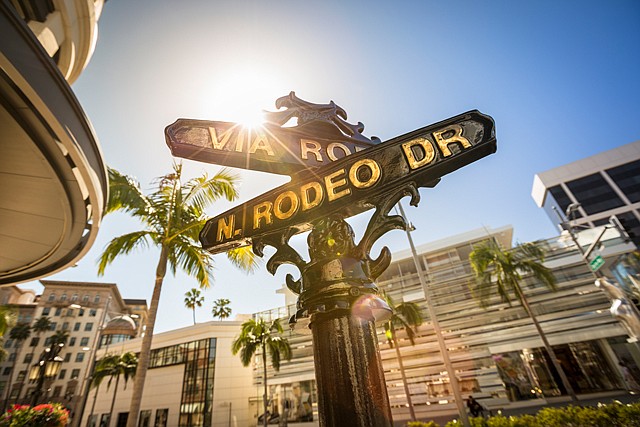 The retail apocalypse is real — except, apparently, when it comes to Rodeo Drive.

While vacancy rates are on the rise at some area malls, and some big-box retailers have shut their doors, things are looking bright on Beverly Hills’ most famous street.

Rodeo’s three-block stretch of shops, home to brands like Gucci, Dior and Chanel, looks to be immune to the havoc wreaked on the retail landscape by growing ecommerce appetites and Amazon.com Inc.’s promise of fast delivery.

“Rodeo Drive has not been affected,” said Carine Mamann, an executive director at Cushman & Wakefield Inc. “If anything, it’s the shining star of the U.S. — a lot of tenants on the street have been renewing their leases, and there’s a ton of construction going on on the street.”

Brands renovating stores on Rodeo include Gucci, Dolce & Gabbana, Cartier, and Chanel, which will soon start construction “on one of the largest Chanel flagships in the world,” according to Mamann.

“All of the luxury brands are investing in Rodeo Drive,” she added.

The renovations are par for the course, said Mahboubi, who explained that many of the big companies renovate and give their stores a fresh look every 10 years or so.

During the renovations, he said, most retailers move to temporary locations nearby.

Jay Luchs, a vice chairman at Newmark Knight Frank, said many shops renovate even more frequently, as often as every three to four years.

Some brands, he said, have purchased their buildings before undergoing large-scale overhauls.

“Sales, the street not being that big, the contribution and dedication that brands have to owning buildings, and the uniqueness of brands and the street — Rodeo has that,” Luchs said.

Rents vary widely but are “very healthy,” he added, saying that vacancy rates are consistently low.

Real estate on Rodeo Drive hardly ever becomes available. When it does, it’s a hot commodity.

“Very rarely does a building (come up) for sale on Rodeo Drive. If a building does become available, you jump on it that second,” Mamann said.

Most buildings, she added, are sold off market.

“The brands are buying for their own needs,” Luchs said. “They are not buying to then rent them out and make money as a landlord. They are buying them to control their destiny.”

And the prices they are paying continue to increase.

“They’ve always gone up; they’ve risen constantly,” Mahboubi said of the area’s real estate prices. “Demand is very high on Rodeo. If there is an asset to hit the market today, you get a higher price. It’s the most sought-after area in the world.”

One of the biggest changes planned for the street is the addition of a hotel. LVMH has purchased a handful of buildings in recent years and is reportedly planning to use the space to open a Cheval Blanc hotel.

The hotel, experts say, could be a big boost for the area. Luchs called it a “massive plus for the street. It’s filling what was known as the end of the block, and the least desirable of the three blocks could very well become the most desirable — or one of the most desirable.”

Mahboubi said the hotel would “create more of a demand to be on the street and, (with) that ultra-luxury mix of hotel and tenants, rents will rise most definitely.”

Mamann added that in the next few years, she expects to see the 400 block of Rodeo Drive even stronger with the addition of a hotel.

“A lot of tenants are betting on that block,” she said.

Gucci updated its flagship store in 2014.

In 2018, Alexander McQueen moved its flagship store from Melrose Avenue to this spot on Rodeo Drive.

LVMH Moet Hennessy Louis Vuitton Inc. acquired the storefront in 2018 for $110 million from the Sterling Organization.

LVMH Moet Hennessy Louis Vuitton Inc. purchased the roughly 6,000-square-foot building from a trust and Dominium Management Corp., who co-owned the building, for $122 million in 2016.

Chanel Inc. purchased a retail storefront from an individual for $152 million. The property was already fully occupied by Chanel, which will renovate the space.

Balenciaga closed its location across the street and reopened a larger store at 338 N. Rodeo Drive in June. The space has nearly double the square footage of Balenciaga’s previous spot.