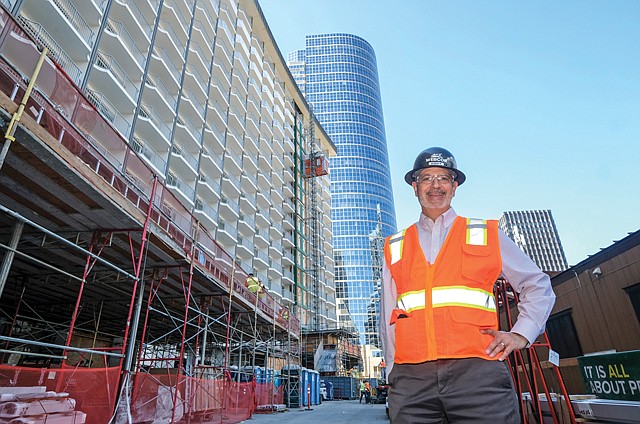 Los Angeles is in the midst of one of its biggest construction booms with cranes visible in every direction from many places around the city.

That translates into very good times for both Webcor Construction, one of the largest contractors working in L.A., and Gust Soteropulos, the company’s senior vice president in Los Angeles.

Webcor is based in San Francisco, but Soteropulos oversees the company’s sizable footprint in Los Angeles. The construction value of the company’s L.A. projects is roughly $2.2 billion, and it placed No. 4 on the Business Journal’s recent list of general contractors in the city, with $462 million in billings last year.

Soteropulos is tasked with carrying out these projects and securing future work in the region. The 61-year-old executive joined Webcor 10 years ago from San Francisco-based Swinerton Builders. The Business Journal sat down with Soteropulos to discuss Webcor’s L.A. strategy and the state of the local construction market.

How did you come to California?

I grew up in the Midwest. At the start of my career, I worked at a company where I moved from job to job. That was fun at first but less fun after I got married and had kids. I happened to get assigned to a construction job in Los Angeles in the 1990s: the Hyperion sewage treatment facility (near Dockweiler State Beach). The job got delayed, then got even longer, the kids got older, and we decided to stay.

How did Webcor become such a major builder in Los Angeles?

Webcor’s first expansion out of the Bay Area was to Los Angeles back in 1991. We started out with relatively small-scale jobs, but then we landed the Ritz-Carlton project in downtown and the W Hotel in Hollywood and a couple other big projects. We started those jobs just before the downturn (of 2008-2009), and they helped see us through what otherwise would have been a very difficult period.

Where do you want to take Webcor?

My job is to look out far ahead. So right now, we’re trying to build a backlog of projects to last for the next three to five years so that once the projects currently under construction finish, there are more projects to take their place.

And you’re moving beyond the private sector, right?

We’ve really broadened our market to some public sector projects and public-private partnerships. We were recently selected for a public-private partnership (P3) to expand and modernize the (Los Angeles) Convention Center, as part of a joint venture with PCL. That project will add about 1 million square feet to the Convention Center (nearly doubling its size). It’s a complicated job, but it’s really what our city needs to make our convention center truly world class.

Any other projects to expand Webcor’s market?

We’re on the short list of bidders for another P3 project: the new city (government) office tower to replace the old Parker Center police headquarters building. P3 projects are relatively new in our field, but they are an area we are pursuing. And we’re also building two 50-million-gallon underground water reservoirs for the Los Angeles Department of Water and Power near Forest Lawn Cemetery.

What’s the most challenging Los Angeles project from your perspective?

The new Century Plaza project. It’s in a compact area, so the site has very few access points, and we’re putting an awful lot of square footage in such a small footprint. And then there’s the historical preservation part for the hotel itself — several presidents stayed there. That was more challenging at the beginning, but we’ve worked through most of the historical issues now.

What kind of work have you done there?

We’ve completely gutted the inside of the hotel and have reconfigured it, all while preserving its historical significance.

What about rising materials costs, which were such a problem last year and into early this year?

Materials prices have risen, and quality workers are hard to find. We do lock in pricing with materials suppliers and contractors, so there’s usually not a price increase during the term of a job. That’s become a standard industry practice over the last decade or so since the last boom period in the mid-2000s. And we also work really hard with our clients, the project owners, to make sure we have the right price and scope of work up front.

Any impact from the tariff wars on materials prices?

So far, I would have to say no. But we are concerned: We get a lot of our materials, such as steel, from Canada and Mexico. We also get some stone and glass from China, but we’ve been able to find workarounds for those, sometimes by finding suppliers in other countries. Of course, that means our staff has to go a little deeper on our sourcing.

What about situations where the project owner finds that materials and labor costs are much higher than they expected?

That’s pretty regular these days. That’s why getting the right scope of work at the right price at the outset — before the contract is signed — is so important. You try not to cut square footage; instead you try to cut costs in other ways, such as changing out materials.

What about NIMBYism — neighborhood opposition to projects you’re working on? Has that impacted your projects?

We see this because we are working in much more dense urban environments. So that has meant more opportunity for opposition to arise. Sometimes that can drive the costs up a little bit depending on what the client/owner has to agree to. In design-build projects, that’s more of a risk for us. But even as a construction contractor, sometimes there are conditions imposed on us: work hour restrictions, restrictions on noise, dust, etc.

What new segments are you eyeing?

In addition to the government projects we’re looking at the higher-ed market. And we’re looking to work with Metro (Los Angeles County Metropolitan Transportation Authority) especially on some of their 28 projects by 2028.

We look at this a lot as the construction business is very cyclical. But this market is so massive that even in the down portions of the cycle, there’s always work to do. Now we’ve had a long run since about 2012 or so where construction starts and construction volumes have been steadily growing. My prediction, for what it’s worth, is that we’ll see a flattening out over the next four or five years, but still an enormous amount of construction volume.

What does this mean for Webcor?

We have to position ourselves for the next four or five years so that we have a backlog of work to keep us busy. But not just any work. We’re trying to secure backlog work that is somewhat resistant to a slowdown. That’s where the public sector projects like the convention center come in, but making sure the funding is already in place so that an economic slowdown will not stop the projects.