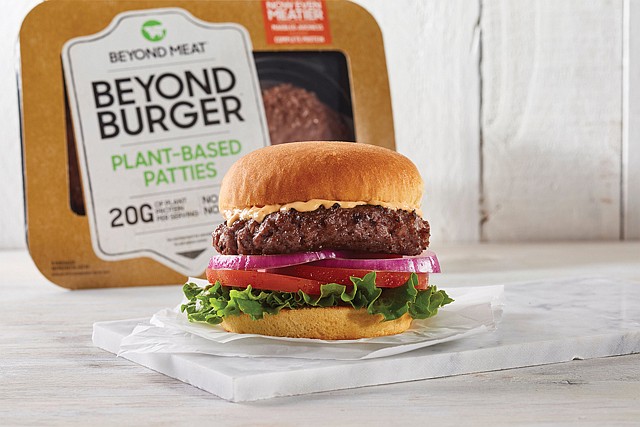 What’s Cooking: KFC and McDonald’s are testing Beyond Meat products.

Just six months after Brown’s 10-year-old company recorded one of 2019’s hottest initial public offerings, the Beyond Meat founder has been drawing comparisons between his business and a couple of other pioneers that upended markets — Tesla Inc. and Amazon.com Inc.

“Why did Tesla have the impact it’s had on the automotive industry when General Motors and Ford and everybody else could see it coming?” Brown asked investors rhetorically during Beyond Meat’s Oct. 28 earnings call. “There’s a playbook here, and we’re exploiting every angle that we can.”

The way Brown sees it, markets knew about the threat posed by companies like Tesla and Amazon, but competitors weren’t quick or focused enough to fend them off.

What differentiated those companies, he believes, was the risk they were willing to take and their level of innovation. By the time competitors swept in, both companies dominated their industries.

Brown contends that Beyond Meat, which is facing increasing competition from startups as well as established industry players, has the same DNA.

“If you’re an incumbent presence that wants to come in and maybe replicate what we’re doing,” Brown said, “you’ll be chasing a ghost because we are moving so quickly.”

For the third quarter, Beyond Meat revenue jumped 250% to $92 million, up from $26.3 million the in the same period a year earlier. About 45% of sales, or roughly $41.5 million, came from restaurants and food service establishments as Beyond Meat secured new deals with KFC Corp., McDonald’s Corp., Subway and Denny’s Corp. — all of which are testing Beyond Meat products.

The company’s solid earnings report is backed by a healthier balance sheet. It logged $4.1 million in income for the third quarter compared to a $9.3 million loss in the second quarter. The plant-based food-maker also raised year-end revenue projections to between $265 million and $275 million, up from a previously announced $240 million.

Despite the strong quarter, Beyond Meat shares plummeted more than 20% the day after the earnings report. Wall Street was expecting a sell-off from early investors whose lock-up period expired, setting free about three-quarters of the company’s shares.

Analysts have said the company is well-positioned for the long term, but many are wary of an onslaught of competitors.

Meanwhile, the world’s largest food company, Nestle, and the nation’s biggest meat packer, Tyson Foods Inc., have recently jumped into plant-based meat production and are hoping to usurp the smaller companies with their distribution heft.

Jennifer Bartashus, an analyst at Bloomberg, said Beyond Meat’s recent earnings were a good sign of initial success and long-term viability. But she warned there are likely going to be bumps in the road as new competitors enter the market. “The good thing is there is room enough for everyone to play,” she said.

Plant-based meat substitutes comprise about 1% of the overall meat sector, but as Beyond Meat and other companies’ products become more common in the refrigerated grocery aisle, Bartashus predicts their share will grow quickly.

A similar scenario played out with soy milk, which now accounts for 13% of milk sales, she said. Consumer consumption began to skyrocket when the dairy-free alternative became a staple in the refrigerated section.

Beyond Meat is now distributed in 58,000 outlets, about 55% of that in the more profitable retail sector. The company also more than doubled its investment in research and development, spending $14.7 million in the first three quarters of 2019.

Bartashus said the risk for Brown is juggling the company’s divergent directions, but the CEO sees it as part of his larger vision. “We have long been clear that our intention is to build a global protein company,” Brown said, “one capable of serving a growing world demand for protein.”