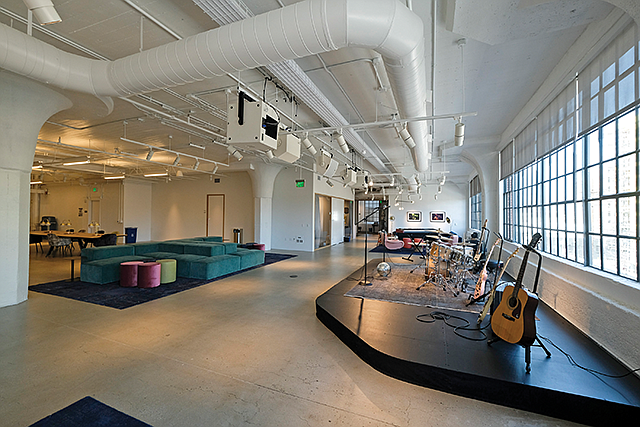 In Tune: Warner Music Group’s new offices in the former Ford Factory in the Arts District. Photo by Ringo Chiu.

Banking, finance, insurance, real estate and legal service companies make up 59% of the tenant base downtown, but other industries are expanding their presence in the city’s central business district, according to real estate services firm Jones Lang LaSalle Inc.

CommonGrounds Workplace and Carr Workplaces Inc. have also signed leases downtown over the last four months. San Diego-based CommonGrounds announced April 24 it had signed a 13-year lease for nearly 46,000 square feet at 915 Wilshire Blvd. It is scheduled to open in early 2020. The building is owned by Lincoln Property Co.

Carr Workplaces said in March it had signed a 24,000-square-foot lease for The Bloc. The location is the group’s only L.A. outpost. The Bloc is a mixed-use site with office, hotel and retail redeveloped by National Real Estate Advisors.

On the media and entertainment front, Warner Music Group Corp. and Spotify Technology have signed leases for a combined 370,000 square feet in the Arts District.

Spotify signed a lease last July for almost 110,000 square feet at 551-581 Mateo St. It is expected to occupy the building later this year.