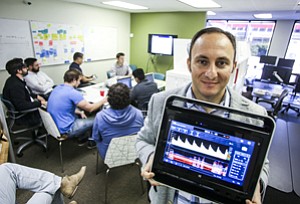 The company is best known for its NeuralBot system, a neurovascular ultrasound device for measuring brain blood flow information in real-time.

“With this financing Neural Analytics will be able to launch the Lucid Robotic System into clinical environments where it will have the greatest impact on patient outcomes,” Neural Analytics Chief Executive Leo Petrossian said in a statement.

Neural Analytics was spun out of UCLA in 2013 and has raised $66 million to date, in part from UCLA Ventures. Alpha Edison has backed Neural Analytics since January 2018 when it led the company’s $15 million Series B raise.

“We are honored to deepen our partnership with Neural Analytics. Over the past year, the company has gained both FDA and EU CE Mark clearance for their revolutionary platform, which harnesses machine learning and robotics to accurately and quickly identify critical neurological conditions,” Alpha Edison Partner Nick Grouf said in a statement. “We are confident that the company will play a central role in shaping the future of data driven diagnostics and bringing new technologies to healthcare professionals to better care for their patients.”