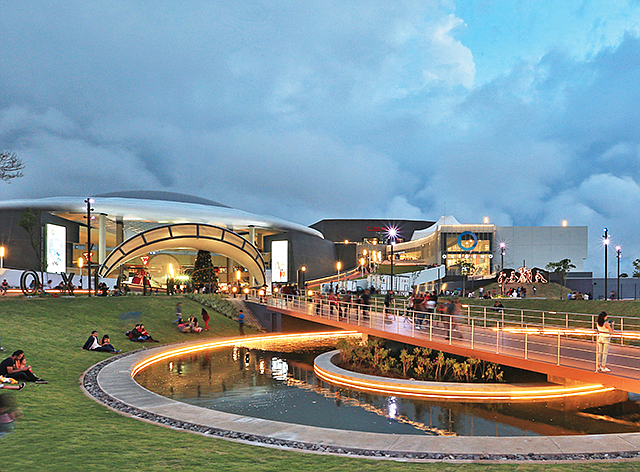 Inspired Design: The Oxígeno center in Costa Rica fits in with the landscape.

Malls are downsizing across the United States as consumers increasingly turn to ecommerce. But demand outside the U.S. hasn’t waned for downtown-based mall architects Jerde Partnership Inc.

Jerde, which has designed millions of square feet of shopping centers overseas, recently completed a 1.56 million-square-foot center in the Costa Rican city of San Francisco de Heredia. The Oxigeno project has a 161,000-square-foot rooftop park, jogging track and 3,000-person event venue, Jerde said May 2. It was developed by Costa Rica-based Cuestamoras-Urbana Partners Alliance.

Eduardo Lopez, Jerde senior vice president of design and the project lead for Oxígeno, said the center was inspired by the inactive volcanoes near the site. “We looked at the local geography … to create a project that reflects the natural beauty of the mountains in the form of a modern building with a cloud on top,” Lopez said in a statement.

In the United States, some of Jerde’s well-known projects include the Bellagio in Las Vegas, Pacific City in Huntington Beach and the makeovers of Santa Monica Place and Fashion Island in Newport Beach.

With its close proximity to downtown and other densely populated neighborhoods, the city of Vernon is an attractive location for industrial developers.

Commerce-based Dedeaux Properties, in a joint venture with Ledo Capital Group, is the latest company to expand its reach in that industrial market with the purchase of a 2-acre infill development site. The seller was not identified, and the deal’s terms were not disclosed.

Construction on the site — at 3520 E. Vernon Ave. — is underway, and it has been preleased to an unnamed restaurateur that has several eateries in Southern California and New York. The planned industrial facility, which will be completed in 2020, will be nearly 47,000 square feet. It will have seven dock-high doors, one ground loading door.

“As downtown gets redeveloped, a high volume of industrial tenants are relocating to Vernon, a user-friendly city that offers larger and more modern industrial facilities,” Brett Dedeaux, president at Dedeaux Properties, said in a statement.

CommonGrounds Workplace, based in San Diego, has signed a 13-year lease for nearly 46,000 square feet downtown, according to an April 24 announcement.

The latest flex-office provider to expand into L.A.’s hot market, CommonGrounds leased the seventh floor and part of the eighth floor of 915 Wilshire Blvd., in downtown’s financial district. It’s scheduled to open in early 2020.

Jacob Bates, CommonGrounds’ chief executive, said in a statement that location was the main draw. “Downtown Los Angeles is experiencing an unprecedented bull market in attracting new developments and new companies looking to take advantage of its untapped potential,” he said.

Irvine-based Ware Malcomb Inc. is the renovation architect for the new space.

CommonGrounds has been on an expansion tear after a $100 million Series A funding round. It has five locations in the United States including one in Long Beach. Two more locations will open in the L.A. area this year.