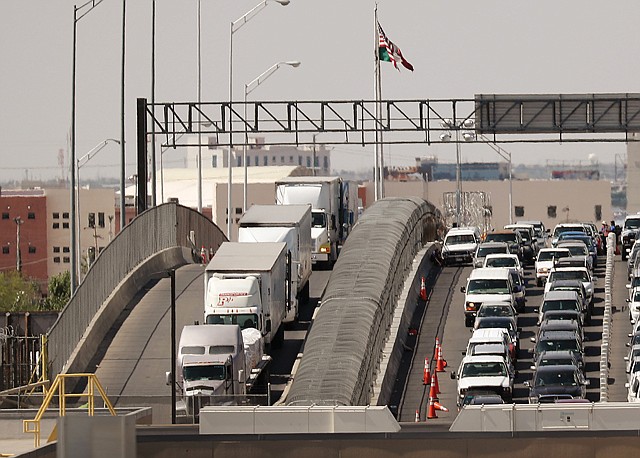 Customs broker Eduardo Acosta has been scrambling to find answers for his customers after President Donald Trump unexpectedly said the United States would impose a 5% tariff on imports from Mexico, beginning June 10.

“They were having a hard time digesting what’s going to happen,” said Acosta, a vice president at R.L. Jones Customhouse Brokers Inc., which has locations in Texas, Arizona and California, including Los Angeles and Long Beach.

As a customs broker, Acosta helps Southern California companies — from produce distributors to manufacturers — ship tens of millions of dollars’ worth of products across the Mexican border. Acosta estimates that with a 5% tax on those incoming goods, importers in the region could face as much as $1.5 million daily in new duties compared to the $100,000 they now pay.

“One of my companies is looking at $20 million worth of duties this year; another client is looking at $70,000 of duties a month,” he said. “My customers could go out of business, and expansions and new investments will decrease significantly immediately.”

American businesses and consumers have come to rely on Mexico for everything from avocados grown in Michoacán to medical devices assembled in Baja California.

But just eight months after signing the new U.S.-Mexico-Canada Agreement covering North American trade relationships, Trump surprised his trading partners on May 30 by announcing new tariffs on Mexican imports — a bid to pressure that country’s officials to do more to stop migration to the United States. The tariffs, slated to take effect June 10, could rise to 25% by October if Mexico doesn’t “dramatically reduce or eliminate” the flow of migrants, the White House said.

Economists say it’s only a matter of time before the latest levies hit consumer prices.

In 2018, $611 billion worth of goods were exchanged by the two countries, making Mexico the United States’ third largest goods trading partner, according to the U.S. Trade Representative.

Mexico exports more fruits, vegetables and agricultural products to the United States than any other country — $26 billion in 2018 — according to the USTR. Restaurants, grocers and shoppers have come to rely on that steady supply of Mexico’s bounty, from mangos to strawberries.

Fast-food chain Chipotle Mexican Grill Inc. was one of the first companies to detail how the tariffs would impact its bottom line. Jack Hartung, chief financial officer of the Newport Beach company, estimated it would cost Chipotle about $15 million in 2019. The company buys avocados, limes, jalapenos, tomatoes and bell peppers from Mexican growers.

“If the tariffs become permanent, we would look to offset these costs through other margin improvement efforts already underway,” Hartung said in a statement.