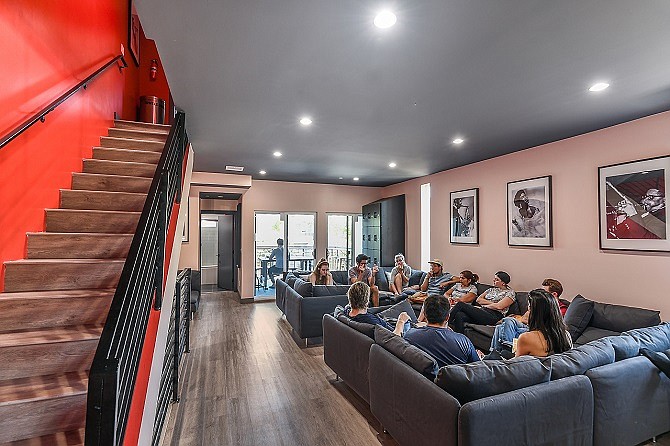 The lack of affordable housing options in major cities has led to a new housing trend known as coliving.

The concept is gaining traction in parts of L.A., and coliving providers are looking to expand.

Hollywood-based Upstart has plans for a handful of additional locations and has begun fundraising for a $15 million Series A round. In early August, the company plans to open a new coliving location in Mid-City. And in October, Upstart is scheduled to open another location in Melrose Hill that will house a dance studio, gym, coworking space and movie theater.

Upstart members can rent a “pod” on a monthly basis that includes a bed, electric outlets, light and amenities. Membership is limited to people working in arts and entertainment industries, and some locations include recording studios and other creative facilities.

According to Chief Executive Jeremiah Adler, Upstart’s Series A funding round is expected to close in four to six months. He said the funding will allow Upstart to expand to 1,000 members in Los Angeles and to open more locations in San Francisco and other West Coast cities.

In the next three years, Adler wants to add at least a dozen more U.S. cities before expanding internationally.

For now, they’re eyeing the Westside.

“Venice is likely going to be our next stop,” Adler said. “We’re looking at opening some beachfront properties there right on the Venice boardwalk. The economics are trickier there, but that’s the problem we’re trying to solve. Can you make it possible for someone to live on the beach for less than $1,000?”

The answer, Adler said, is yes.

Upstart opened its first L.A. property in 2016. It has since added a handful of locations and a team of 30 employees, many of whom started as members.

Upstart isn’t the only company betting big on coliving. Major coliving providers operate 3,700 units with 9,300 units in the pipeline in the United States, according to a report from Cushman & Wakefield Inc.

At least two coliving projects have already opened this year in Los Angeles.

C1, a project in Marina del Rey with coliving and traditional apartments, opened earlier this year. It was developed by West Los Angeles-based California Landmark Group and is managed by San Francisco-based Starcity Properties Inc.

And Node Living UK Ltd., based in London, opened a spot in Echo Park in June.

An earlier version of this story misstated the timeframe for Upstart's pod rentals. Members can rent individual pods on a monthly basis.