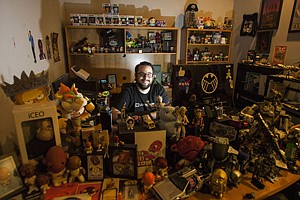 Out of Box: Matthew Arevalo with ‘mystery’ items at Loot Crate in Los Angeles. Photo by Ringo Chiu.

Lincoln Heights-based retailer Loot Crate Inc., which sells subscription boxes of pop culture apparel and collectibles, closed down its Vernon warehouse and laid off the facility's 150 workers on July 19.

Loot Crate said it closed the warehouse in Vernon to transfer its shipping and receiving facilities to a third-party logistics company.

"There's currently no plan to open a new warehouse, as the 3rd party logistics company and their warehouse afford us the opportunity to work out of a singular warehouse location for our primary shipping and receiving needs," a Loot Crate spokesman said.

The spokesman said most employees laid off were encouraged to apply for openings at the company's headquarters, and those who didn't transition to other roles were offered severance packages.

Transitioning to a new warehouse and shipping provider "allows us to adapt and grow our shipping capabilities in ways that we weren't able to before," the company said.

The company that calls itself “Comic-Con in a box” has raised roughly $41.5 million since launching in 2016, according to industry tracker PitchBook Data Inc. Beverly Hills-based venture capital firm M13 Ventures Management is among Loot Crate’s financial backers, alongside Santa Monica-based Upfront Ventures Management.

The company filed plans for the closure and layoffs with the state Employment Development Department in May. The EDD office published the filing June 1.

Loot Crate now operates only one warehouse in the U.S., in Lock Haven, Pa. It would not disclose the name of the new third-party firm.