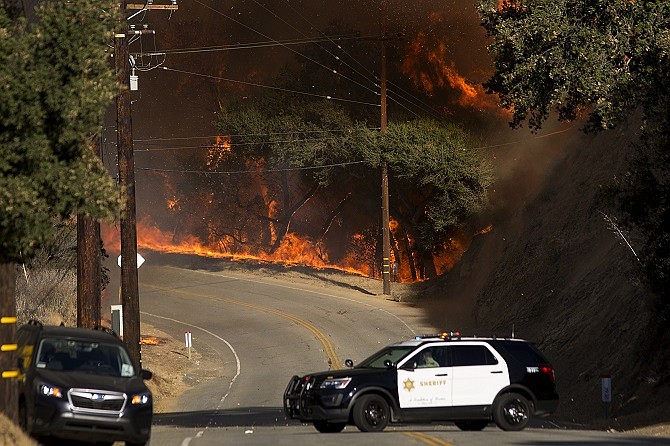 Rosemead-based Edison International said July 25 that it will issue $2.7 billion in new stock by the end of the year as part of a $4.9 billion finance plan. Roughly half the money will go into a wildfire fund recently authorized by the state.

The announcement of the finance plan came as part of Edison’s second quarter earnings release on July 25.

Edison’s utility subsidiary, Southern California Edison – or SCE – has agreed to pay $2.4 billion in nonratepayer funds by a state deadline of Sept. 10 as its contribution toward the wildfire fund that's intended to reach $21 billion. Half the fund, or $10.5 billion, will come from the state’s three investor-owned utilities, including SCE. The other $10.5 billion will be charged to ratepayers of those utilities over a 15-year period.

The fund, which the Legislature approved and Gov. Gavin Newsom signed into law July 12, is intended to cover damage claims that are coming in against the three utilities from thousands of victims of several major wildfires over the last three years. The claims allege the fires were caused by utility wires or other equipment.

In Edison’s case, the company’s second quarter earnings report revealed that through the end of last year, SCE had accrued $4.7 billion in liability from the December 2017 Thomas Fire and subsequent January 2018 mudslide, as well as the November 2018 Woolsey Fire. New damage claims have continued to pour in since then.

PG&E Corp. and its utility subsidiary Pacific Gas & Electric Co. filed for Chapter 11 bankruptcy protection in January, claiming more than $50 billion in estimated liabilities stemming from wildfires, including the deadly Camp Fire that destroyed much of the city of Paradise in November.

The enactment of the wildfire fund removed a barrier to debt offerings, as debt rating agencies backed off their threat to lower the credit ratings of Edison and Sempra Energy (parent of San Diego Gas & Electric Co.), a move that would have substantially raised utility borrowing costs.

The wildfire contribution comes on top of a $2.5 billion financing plan that the company announced in the first quarter designed to bring the company’s equity to debt ratio closer to its goal of 52% equity and to provide funds for SCE’s future growth. That $2.5 billion is to be split into a $1.5 billion stock offering and $1 billion in debt.

Edison Chief Financial Officer Maria Rigatti said in the earnings teleconference call that the company is evaluating the timing of the stock offering, which is to total $2.7 billion.

Edison shares closed July 25 at $70.03, down 99 cents or 1.4%. However, that was before the earnings release and analyst teleconference call.