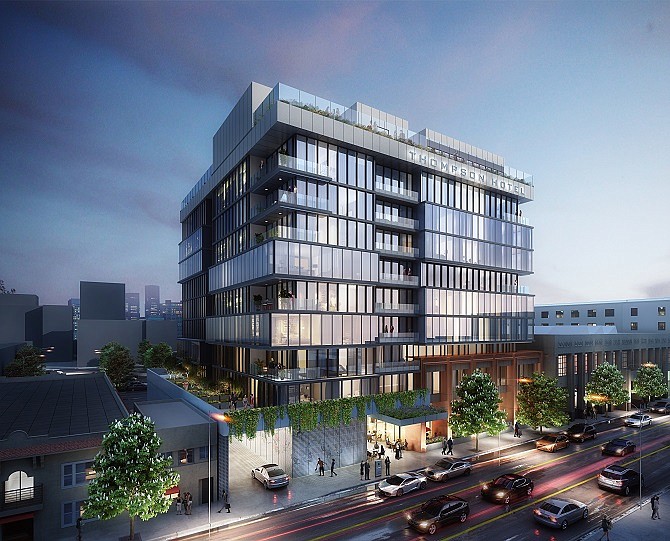 Rendering of the planned Thompson Hotel in Hollywood

It’s been a record-setting year for hotel construction in California, and L.A. County is outpacing the rest of the state, according to data from Atlas Hospitality Group.

Statewide, 36 hotels have opened so far this year, compared with 26 hotels at the same point last year. The number of new hotels in the planning stages increased 19%.

In L.A., four new hotels with 505 rooms opened during the first half of the year. They were the 271-room Proper Hotel in Santa Monica, the 176-room AC Hotel Beverly Hills, the 49-room Palihotel in Culver City and the nine-room Arts District Firehouse Hotel in downtown.

“There’s many factors, but they all roll up into downtown becoming a city unto itself with the number of workers and residents and visitors converging on downtown, it creates a great deal of demand for hotels,” he said. Downtown has 22 million visitors annually, he said.

Griffin said he expects to see the number of hotels continue to rise, especially with the planned expansion of the Convention Center.

Other markets are building, too. “The other areas of L.A. County were seeing record profits on existing hotels, record revenues, a very very strong economy and the willingness and attractive interest rates of lenders to finance new construction,” Reay said.

Most of the hotels coming onto the market are high-end and luxury hotels. With high land and construction costs, it “does not make economic sense … to build lower-end budget motels today. Those owners that do have motels, as long as they do put money back in the product, they almost have a monopoly in the market,” Reay said.

The biggest issue right now, Reay added, is rapidly rising construction costs. Still, development shows no signs of slowing down. He anticipates that we will see the same development pace into 2021.