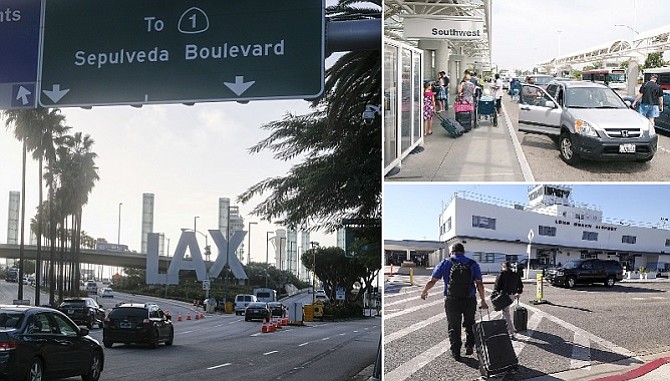 This story has been updated to include recently released data from the Hollywood Burbank Airport.

Passenger traffic rose in 2018 at all four commercial airports serving Los Angeles County, according to statistics released recently by each of the airport governing authorities.

At LAX, while 3 million more passengers went through the terminals in 2018 compared to 2017, the growth rate slowed in 2018 to 3.5 percent compared to 4.5 percent for 2017, according to Los Angeles World Airports, the city agency governing the airport.

Alaska Airlines still came in at No. 5 at LAX, but its total jumped 60 percent to 5.86 million passengers for a market share of 6.7 percent as a result of its merger with the airline that held the No. 6 spot in 2017, Virgin America.

About one-third of that increase came from the largest air carrier serving the airport, Southwest Airlines, which added 200,000 passengers for a total of 2.74 million. Frontier Airlines’ passenger traffic quadrupled to 243,000 as that airline added several flights. International traffic rose 61 percent as China Airlines saw 130,000 passengers on its nonstop service to Taiwan, which launched last spring.

The picture was not so rosy at Long Beach Airport, where passenger growth slowed to 2.7 percent in 2018 from 32 percent in 2017. In September, JetBlue Airways, by far the largest carrier at the airport, sharply reduced its flights there following a failed bid to use the airport as a hub for flights to Mexico and other international destinations. Passenger traffic on JetBlue averaged around 170,000 a month following the dropped flights, down from an average of 260,000 passengers a month earlier in the year.

Southwest Airlines picked up some of the slack, adding flights to take its monthly passenger counts up to nearly 80,000 from about 45,000 earlier in the year. Newcomer Hawaiian Airlines averaged about 10,000 passengers a month since starting service at Long Beach in June.