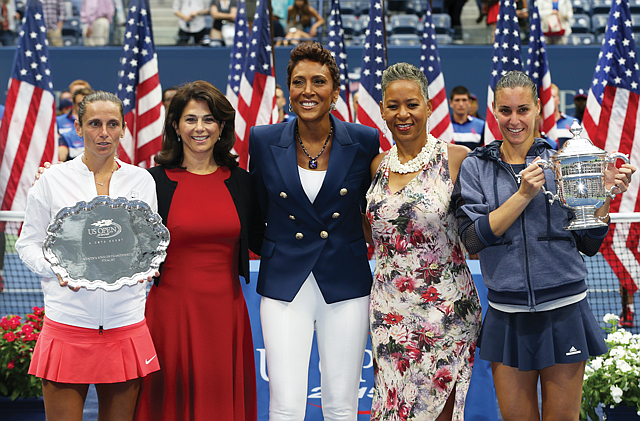 Winners Circle: Kelly Coffey (second from left) at trophy presentation after the final of the 2015 U.S. Open. Photo by Matthew Stockman/Getty Images

The uppermost echelon of Los Angeles’ community of finance professionals is about to welcome its newest member.

Coffey officially takes over the top spot at City National Feb. 1, succeeding long-time Chief Executive and Chairman Russell Goldsmith, who will stay on as board chair.

Coffey was the top executive at JPMorgan Chase’s U.S. private bank, one of the nation’s largest wealth management businesses, until October when City National announced she would replace Goldsmith as chief executive.

Kelly declined to comment through a spokesman on her new position, citing a so-called garden leave arrangement with her former employer that keeps her from speaking publicly until after she starts at City National.

Coffey is considered one of the most senior women on Wall Street where she held for the last five years the chief executive spot at JPMorgan Chase’s U.S. private banking unit. She ranked No. 13 on trade publication American Banker’s list of most powerful women in finance in 2018.

“Don’t be afraid to step out of your comfort zone, you can handle it,” advised Coffey, in 2013 while she was the New York metro region head of J.P. Morgan Private Bank. She was reflecting on the significance of Women’s History Month, according to a JPMorgan Chase video posted on Facebook.

A review of her career based on public documents and media reports reveals Coffey has spent her entire career with JPMorgan, starting in 1989 with the financial institution’s mergers and acquisitions division in Buenos Aires, Argentina where she spent six years.

Coffey moved up the ranks steadily at JPMorgan, leading at various points in her career the firm’s derivatives marketing group, its corporate finance advisory team for North America, and its diversified industries investment banking team. She has also led the bank’s women’s network and chaired its reputation risk committee in North America, according to her LinkedIn page.

She earned a bachelor’s degree in international affairs and French from Lafayette College, and a master’s in foreign service from Georgetown University.

In one of her last assignments at Chase, Coffey began a strategic process in April 2018 of building a stronger footing for the private bank, adding 1,000 new advisers and opening 24 offices. She didn’t finish the job as she bolted in late October, transitioning to the very top of City National’s hierarchy.

Her work at Chase is far from complete, according Chase spokesman Darin Oduyoye.

Coffey has already relocated to Los Angeles, but she hasn’t yet purchased a home, according to Debora Vrana, a spokeswoman for City National.

“Kelly just arrived in L.A. She’s settling in, enjoying the city and is very excited about her opportunity at City National,” Vrana said.

Changing of the guard

Coffey’s entrance means an exit of the CEO position for Goldsmith, who has been at the bank’s helm for 23 years. While the veteran banking exec will stay on as board chair, his departure ends a generational dynasty at City National that saw the chief executive role at the bank occupied by a Goldsmith for 43 consecutive years. Russell Goldsmith, 68, succeeded his father, Bram Goldsmith, who took over in 1975 as chief executive from the bank’s founder, Alfred Hart, and as chairman from Ben Maltz, Bram’s father-in-law. The elder Goldsmith, who died in 2016 at age 93, pushed the Beverly Hills bank to more than $1 billion in assets by the late 1970s and ensconced the institution’s reputation as one of the go-to banks for Hollywood; it is often referred to as the “bank to the stars.”

Coffey, 53, will be City National’s fourth chief executive in its 65-year history.

Russell Goldsmith joined the company’s board of directors in 1978 and was named chairman and chief executive in 1995. Since then, City National has expanded from 16 offices in Southern California to 71 offices in six states plus Washington, D.C. Its assets have grown from $3 billion in the mid-1990s to $50.3 billion today.

Goldsmith also oversaw City National’s purchase by Toronto-based Royal Bank of Canada in 2015. Since the deal, City National has added 1,000 new employees and announced plans this past fall to open “seven or eight” new offices over the next 18 months.

Goldsmith said Coffey is at the stage of her career where she will be City National’s chief executive for a very long time and praised her leadership chops.

“She has a fabulous management style, and her values fit in superbly and are in sync with our clients,” he said.