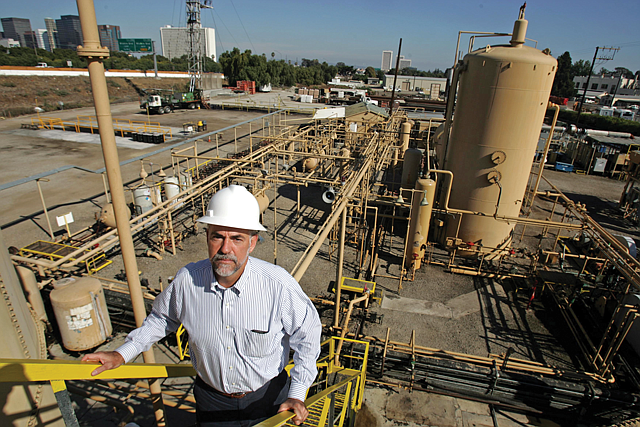 Out of Gas: Breitburn co-founder Hal Washburn at one of the firm’s Los Angeles facilities. Photo by Ringo Chiu.

The saga of Breitburn Energy Partners, a downtown-based oil exploration partnership, came to an end in April 2018 as the company exited a two-year bankruptcy by selling off its assets to two groups of creditors for a combined total of $1.57 billion. By July, Breitburn’s 30-year L.A. presence had ended as most operations had moved to Houston.

Shareholders were the big losers in the deal. They had backed a last-minute $1.8 billion offer from a Houston energy fund that could have brought them some recompense. But that offer was rejected by company management, and the bankruptcy court judge sided with management’s plan that canceled all shares.

Breitburn, which was founded in the late 1980s by onetime Stanford University roommates Randy Breitenbach and Halbert Washburn (the company name was an amalgamation of their last names), accumulated oil field assets in the lucrative West Texas Permian Basin, other parts of the Midwest, the Rocky Mountains and California. In 2006, the company went public as a master limited partnership, a structure that allows profits to be passed directly through to shareholders.

Breitburn filed for bankruptcy in May 2016, one of many oil companies hit by the oil price collapse that began in late 2014 and continued until early 2016. The partnership was hit especially hard because it incurred $2 billion in debt to finance a purchase of another oil company in the Permian Basin just three months before the market imploded in 2014. At the time of the bankruptcy filing, the company’s debts totaled around $3 billion.

The bankruptcy process was longer than typical, in part because U.S. Bankruptcy Court Judge Stuart Bernstein authorized the formation of an equity committee to address shareholder concerns. Because of its partnership structure, Breitburn shareholders stood to be hit with a double-whammy as a result of the bankruptcy. That’s because under master limited partnership rules, the more than $1 billion in forgiven debt could have been treated as taxable income, leaving large shareholders with six-figure tax bills despite their shares being worthless. The equity committee pushed to have the company’s assets put on the auction block to fetch the highest possible price instead of being sold off directly to creditors without testing the market demand.

Indeed, more than 18 months into the bankruptcy, as oil prices had recovered a bit from their early 2016 lows of $30 a barrel, the unsolicited $1.8 billion offer from Houston energy fund Lime Rock Resources came in; attorneys for the equity committee urged that the offer be considered.

But by that time, Breitburn’s management and its attorneys had crafted a bankruptcy exit plan that involved selling off the oil field assets in two chunks. The most lucrative Permian Basin assets were to be sold to a select group of bondholders led by New York hedge fund Elliott Management Corp. and WL Ross & Co. – the New York private equity firm founded by U.S. Commerce Secretary Wilbur Ross – through a $775 million rights offering.

The company’s remaining oil field assets throughout the United States were to be sold for $793 million to another group of creditors, led by EIG Global Energy Partners, of Washington, D.C.

After some last-minute hiccups, Judge Bernstein approved this exit plan, and the transactions closed April 6. The assets purchased by EIG retained the Breitburn name as an operating unit of a new company called Maverick Natural Resources. Washburn was named as chief executive of Maverick.

Calls to Maverick Natural Resources for this story were not returned.

In the end, while share values were wiped out through the bankruptcy, the creditors agreed to structure the successor operations to minimize the tax hit for shareholders.