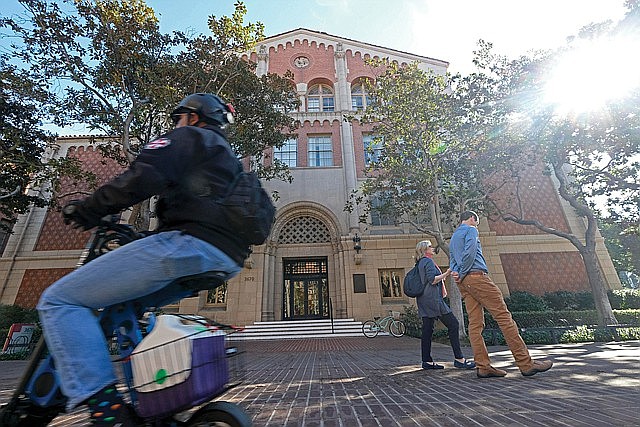 UPDATE: The trustees met for roughly four hours on Jan. 23. According to a university spokesman, there were “no significant actions” or statements resulting from that meeting, either with regard to top university administrators or with regard to the status of Marshall School Dean James Ellis.

Ahead of a crucial USC Board of Trustees meeting on Jan. 23, dueling letters from both sides of the dispute over the future of Marshall School Dean James Ellis that has rocked the campus have been sent to the board.

A letter from a 116-member advisory board of business leaders to the Marshall School of Business was sent late Jan. 21 to the trustees urging them to vote to retain Dean James Ellis for the remaining three years of his contract.

The letter also urged the trustees to replace current chair of the Board of Trustees, Rick Caruso and to remove from their posts the university’s top three administrators, including interim university President Wanda Austin.

The other letter, from a group calling itself “Concerned Faculty of USC” urged the trustee board to stay the course with regard to its December decision to uphold Austin’s early termination of Ellis’ contract as dean. But it also urged governance reforms to ensure that faculty be better informed of such decisions in the future.

Read the Marshal Board of Leadership statement here.

Read the statement from Concerned Faculty to USC Trustees

The Marshall Board of Leaders previously sent a letter to the Board of Trustees before last month’s trustee meeting urging the trustees to overturn interim President Wanda Austin’s decision to terminate Ellis as Marshall School dean this June, three years before the expiration of Ellis’ contract. That earlier letter also urged an independent examination of the allegations in a confidential report that Ellis had failed to follow through on discrimination claims against Marshall School faculty and staff.

The trustees, however, voted to endorse Austin’s early termination of Ellis.

This most recent letter goes further, calling for the removal of trustee board chair Caruso and three of the university’s top administrators: Austin, Provost Michael Quick and Carol Mauch Amir, senior vice president of legal affairs and professionalism.

The letter also states that a confidential report, dubbed the Cooley Report and allegedly containing a tally of discrimination claims against Marshall School faculty and staff, was not disseminated to all the trustees in advance of their December vote. And it references an incident at that December trustee meeting in which trustee Ming Hsieh was allegedly forced to leave the meeting after his remarks in support of Ellis were limited to one minute.

“This self-inflicted leadership crisis at USC is not going away…In fact, the objections and disillusionment throughout the Trojan Family have continued to grow as new facts about Caruso’s and the Interim President and Provost’s office’s behaviors and actions have been brought to light,” the letter states. “The crisis is expanding and at this point it is clear that it will not subside until the Board of Trustees finally fully engages and takes responsibility for the administrative errors, reaffirms USC’s values and corrects course.”

“This is now beyond saving a respected Dean’s extraordinary reputation and restoring the hard-earned trajectory of the Marshall School,” the letter continues. “It now goes to the heart of USC’s values and legitimacy of the university’s leadership itself.”

Reached the afternoon of Jan. 22, spokespeople for the university said the school was working on a response to the letter from the Marshall Board of Leaders.

The letter dated Jan. 22 from the Concerned Faculty of USC was not signed by specific faculty members, so there was no indication of how many faculty members it represents or who is leading that group.

“Appointment and dismissal of deans are ultimately decisions for the President and Provost, and the Board of Trustees was correct to reiterate its support for President Austin’s authority to dismiss the Dean of the Marshall School,” this letter states. “We agree with the principle that Deans – like all of us – are accountable for the climate of diversity and inclusion they create around them.”

The letter does, however, fault the university administration for how it went about making the decision to terminate Ellis’ contract as dean, effective this June.

“At a minimum, the President and Provost should have consulted in advance the President and Academic Vice President of the Academic Senate, along with elected representatives of the Marshall School faculty,” the letter states. “In the absence of faculty participation and transparency, the strong Marshall School faculty reaction against the decision should have surprised no one… Much needs to be done for our common ideals of transparency and shared governance to be fully realized.”

The USC Board of Trustees is scheduled to meet in closed session on Jan. 23 and is expected to take up again the issue of Ellis’ tenure as dean.