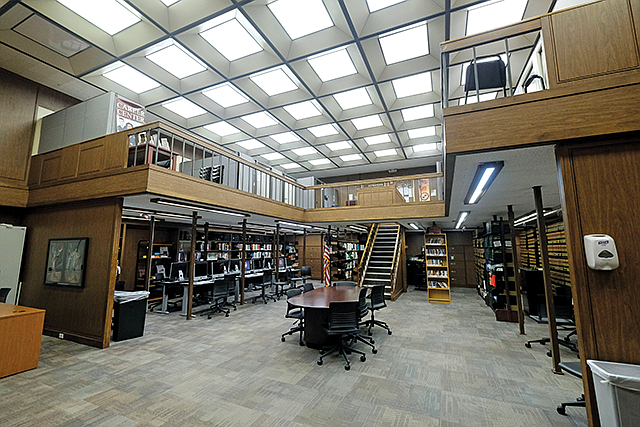 Specific Needs: Universities like Cal State LA have unique requirements, like this study space at The Alhambra. Photo by Ringo Chiu.

Los Angeles is increasingly a destination for universities and colleges looking to expand educational offerings in cities outside their home geographic region – and the influx of satellite campuses means increased demand for real estate.

There were four schools last year that signed new leases in Los Angeles, according Jones Lang LaSalle Inc., and brokers say the spaces these institutions are looking for need to have ample parking, be close to public transit and include conference rooms and auditoriums.

“There is a tremendous amount of unmet demand in some of the programs that are being offered,” said Craig Cassell, the leader of the education platform at Cushman & Wakefield Inc. Students want to be in locations with career opportunities as well.

That last point was an integral part of New York University’s decision to sign in November a lease for a satellite campus at 145 S. Fairfax Ave., near the Farmers Market. The campus will be home to a new program, which is expected to open in the fall and have 20 to 40 students a semester.

Students in the program will take night classes but spend their day at internships, Linda Mills, NYU’s vice chancellor and senior vice provost for global programs and university life, said.

“What was important to us was that our students be located in an area that is both historical and contemporary, and a meaningful place in terms of the entertainment and the media industries,” Mills said.

Newmark Knight Frank’s Jennifer Frisk represented NYU on the lease for a partial floor of the building, which is owned by A.F. Gilmore Co. Additional details about the lease were not available.

Also in November, Chicago School of Professional Psychology announced it had signed a lease to relocate within downtown. The school is moving to a 37,515-square-foot space at the Aon Center in a 10-year, 5-month lease valued at $15.7 million.

Michele Nealon, president of The Chicago School, said that while the new campus will be roughly the same size as its current campus, it will offer greater opportunities.

“Having a location where we can have larger community meetings, conferences, workshops and events is an added focus. The building is going to provide this for us,” she said. The new building has an auditorium and meeting rooms.

The school has 650 students in its downtown location.

In December, Ratkovich Co. announced that Cal State LA had signed a 12,000-square-foot lease at The Alhambra, which is home to other educational institutions including USC, Alliant International University and Platt College.

“For the last couple of years, they have been using and renting parking from us because they are building a new parking lot and don’t have any more space, and we’ve been talking to them for a number of years. Now they have rented out a space on campus to grow,” Moloughney said.

She added that The Alhambra looks like a college campus and has the feel many want from a satellite campus. Parking and a campus environment are really what schools look for, she said. The Alhambra is cheaper, she said, than similar spaces downtown.

The Alhambra also offers a large auditorium and study areas.

Cassell said auditoriums, meeting rooms and collaborative spaces are being asked for, along with more efficient spaces.

“We’re looking for efficiency. The way that your students or your faculty or your administration use potential space is changing,” Cassell said. “The way that people are learning is changing or evolving. You need to be continually thinking about what your campus footprint looks like.”

Avison Young’s Jonathan Larsen represented The Chicago School when they first moved to Los Angeles in 2008. He has also done work with USC. The market for satellite campuses, he said, has changed drastically.

“When I first represented them (The Chicago School), a lot of landlords were saying they didn’t want this use, didn’t want students,” he said.

Landlords were worried schools were going to have too much of a party environment and young kids. Now that satellite offices have been around longer, landlords want them in their buildings.

“Landlords want the credit,” Larsen said. “They like the good credit of the institutions. It helps their retail, too. You’re going to have a couple hundred to over a thousand students.”

Moloughney said having a few smaller locations versus one large campus allows schools to reach a larger population and provides more opportunities than if you were looking for one large space in Los Angeles’ tight real estate market.

Larsen said he expects to see more satellite campuses moving forward, especially in areas like downtown that are accessible via public transit. In August, Arizona State University signed a lease for the Herald Examiner Building in downtown. It will not occupy the building until 2020.

Mills, an L.A. native, is not surprised so many schools are launching satellite campuses now.

“I think there’s something that’s shifted − accessibility in terms of the entertainment industry with the addition of technology. I sense that there is an opening in Los Angeles that makes it more accessible,” Mills said. “For us, the timing is right.”