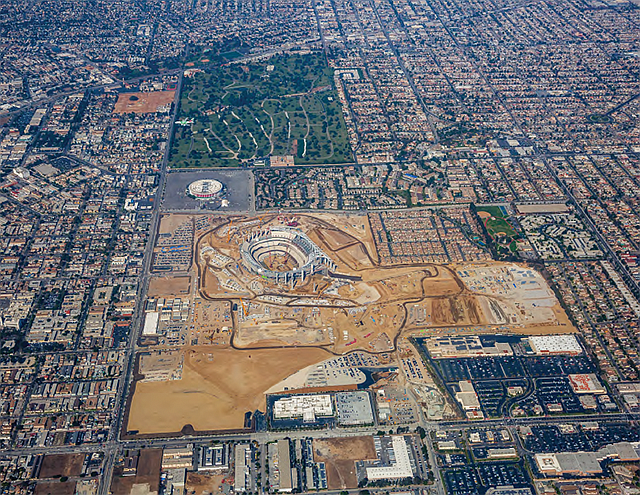 Cavernous Construction: Aerial view of the Inglewood stadium in November.

Development in Inglewood has skyrocketed ahead of the opening of the stadium that will house the National Football League’s Los Angeles Rams and Los Angeles Chargers.

The stadium is part of the LA Stadium and Entertainment District at Hollywood Park, a massive development spearheaded by Rams owner Stan Kroenke. The development features a performing arts venue; 2,500 units of housing; and 890,000 square feet of retail space. It will also have a 300-room hotel; 780,000 square feet of office space; 25 acres of parks; and a performance venue.

It will open in stages starting in 2020.

“History is being made,” Inglewood Mayor James Butts said.

The construction of multiple aspects of the project is ongoing and is reshaping the landscape of Inglewood, with hotels as a key aspect.

In addition to the hotel in the LA Stadium and Entertainment District at Hollywood Park, a 120-room Tru by Hilton hotel is planned for the area.

“L.A. puts hotels where they think people will occupy them,” Butts said. “It’s more than the stadium. L.A. has changed its brand. It’s clear we’re going to be a destination city.”

NFL Media is developing a 200,000-square-foot complex at Hollywood Park, expected to open in 2021.

Healey said the area is unique in that it is one of the few areas in Los Angeles that can accommodate large tenants.

“We have the ability to customize buildings for them. There is a good amount of land and entitlements for them,” he said.

Other entertainment sources are betting big on Inglewood. The Los Angeles Philharmonic will relocate its youth orchestra to a Frank Gehry-designed project in the city. The Los Angeles Clippers are also looking to build a stadium in Inglewood although the project has yet to be approved.

The construction boom is not limited to commercial space around the stadium. Several large residential projects are in the works as well, including a 228-unit detached condominium complex at 333 N. Prairie Ave. being developed by Harridge Development Group.

Compass Commercial Executive Vice President Dario Svidler said that while the stadium is a huge development, it may not be the most meaningful one for the city’s residents. That would be the Los Angeles County Metropolitan Transportation Authority’s $2 billion Crenshaw Line, which is set to open at the end of 2019.

“The biggest moving part outside of the new stadium is the Crenshaw line,” Svidler said. “The Crenshaw line, to me, is the most important part of Inglewood’s revitalization.”

Inglewood’s proximity to Silicon Beach makes it a great “middle location” for renters looking for less expensive homes, he added.

Another big factor in development is Market Street and the downtown Inglewood area.

“What ultimately Inglewood is still missing is Market Street, the retail and spiritual core of Inglewood that has been desolate for decades,” Svidler said.

The area is starting to be more developed, which experts agree is important for the district.

“In the next seven years, Inglewood is going to be an international sports, entertainment and tourist destination, but we are going to preserve the small-business flavor of Market Street,” Butts said.

Healey and Svidler agreed that one big thing driving development around Inglewood is how business-friendly the city has been.

“City Hall is being very business-friendly, very accessible to tenants and understanding what their needs are,” Healey said.

Estimated Completion Date: It will open in stages starting in 2020

NFL Media is developing a 200,000-square-foot complex for the NFL Network, NFL.com, the NFL app and the NFL RedZone. There will also be an outdoor studio with enough space for an audience. The development is part of the larger LA Stadium and Entertainment District at Hollywood Park. NFL Media currently has offices in Culver City.

The Clippers are hoping to move out of downtown and into a city-owned site in Inglewood. The controversial stadium is expected to seat 18,000. There will also be a practice facility, retail space and outdoor areas.

Estimated Completion Date: 2024, in time for the NBA season.

Developer: The City of Inglewood, municipal entities and other private owners currently own the land. If the project is approved, the Clippers will purchase the properties.

In November, the mayor and city council approved a 120-room Tru by Hilton hotel, which will have a market, fitness room and rooftop deck.

Renderings have not yet been released

The Los Angeles Philharmonic is redesigning a former bank building into a 25,000-square-foot youth orchestra center. The $14.5 million project will have a choir room and practice spaces. The building will be named the Judith and Thomas L. Beckmen YOLA Center @ Inglewood.

The site of the former Daniel Freeman Hospital was purchased for roughly $36 million in 2017. A 228-unit detached condominium complex will be built in its place.