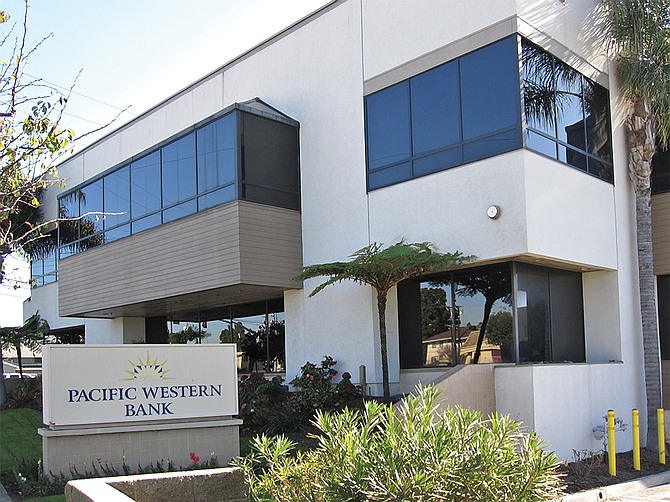 Shuttered: A Pacific Western Bank branch that closed in 2018.

Bank branches in Los Angeles County have consistently declined each year over the past decade, but the pace quickened in 2018 with the most branch closings since the Great Recession.

The uptick in shuttered branches is driven by a number of different industry forces, including rising interest rates, consolidation, the move to online banking and the drive for increased profitability, according to analysts and bankers.

It’s unclear whether the closings are an early warning sign of a weakening economy or the continuation of a larger trend that has seen many banks reduce their physical footprint.

It could also be some combination of a number of factors, according to Zain Tariq, a Charlottesville, Va.-based associate industry expert with S&P Global Market Intelligence.

“Postrecession, you had a large number of branch closures, cutting branches as part of cost savings and ultra-low interest rates,” Tariq said. “Now rates have started to rise, and there’s less of a physical need for branches.”

California’s 100 total bank branch closures was the third most branch closings in 2018, behind Florida’s 200 and New York’s 134.

The 100 branch closings in California last year nearly equaled the 104 closed in 2010, just as the Great Recession was ending and the economy was beginning to heal. The most in California was 1,175 in 2001 when the nation was exiting an earlier economic downturn. Roughly 310 of the closings in 2001 were in L.A. County, the county’s highest number of closures, according to S&P Global.

Koreatown-based Bank of Hope announced plans last month to close nearly 10 percent of its branches over a swath of its nine-state territory, as well as stop selling off its small business loans into a secondary market as a way to improve profitability.

A Bank of Hope spokeswoman declined to comment on its strategic moves. The bank’s branch closings and small business loan strategy are part of the institution’s wider plan to cut costs and reduce expenses following its July 2016 formation through a merger of BBCN Bank and Wilshire Bank.

Hanmi has stated it would close two branches in Illinois; one in Austin, Texas; and one in Irvine; in 2019 as part of a consolidation plan, due, in part, to a purposeful slowdown in lending.

Cathay General Bancorp – parent of Cathay Bank – completed in October 2017 its $350 million acquisition of SinoPac Bancorp, a merger that Cathay Chief Executive Pin Tai said at the time stabilized the bank’s position “with a bigger branch network” of 42 branches in California.

“All were closed in connection with the acquisition,” said Cathay Chief Financial Officer Heng Chen, in an interview. “Most of the branches closed were very close to each other.”

Cathay bank was No. 12 on the Business Journal’s 2018 list of Financial Institutions ranked by L.A. County deposits as of June 30, with $6.5 billion.

Some analysts say the branch closings have hurt earnings “slightly” but nothing seriously even while banking stocks have seen double-digit drops in market capitalizations.

Donald Worthington, banking analyst with Raymond James Financial Inc., recently lowered his earnings estimates for Hope Bancorp, for instance, by 2 cents to $1.44 for all of 2018 and 3 cents to $1.49 in 2019.

“We do not see a catalyst to move the share price appreciably in either direction over the near term,” said Worthington of the bank.

The driving force behind branch closings is to essentially build liquidity, create efficiencies in each banking system and boost competitiveness.

Still, other banks are bucking the trend, namely New York City-based JPMorgan Chase & Co. – the parent company of Chase Bank – and Charlotte, N.C.-based Bank of America Corp., which have the financial muscle to move into L.A.’s diverse ethnic markets.

Chase has a $20 billion, five-year plan to open 400 new branches in new locations throughout the United States.

On Saturday, Chase Bank had a ribbon-cutting for a new downtown branch at the corner of South Grand Avenue and West 11th Street.

“Over the last 10 years, we’ve built 307 in California, and 106 of those were in L.A. County,” he said. “Nearly one-third of our branches in California are less than 10 years old. We continuously review our branch portfolio, adding in high-growth areas and consolidating when it makes sense.”

He cited redundancy and decreased foot traffic due to increased digital and mobile banking as reasons for branch closures.

In February, Bank of America said it planned to open more than 500 new branches across the United States through 2022 as the bank continues to invest in physical and digital enhancements.

Bank of America has “remained stable” with roughly 245 branches in Los Angeles County for the past several years, Bank of America spokeswoman Colleen Haggerty said.

“While we may close some (for example, due to lease expirations or demographic changes that affect foot traffic), we also open other new ones and have invested tens of millions of dollars to renovate a majority of our retail locations,” she wrote in an email.

“In regards to the 500 new financial center openings, we have not determined where all of them are opening just yet – initial roll outs have mainly happened in newer markets,” she said.

San Francisco-based Wells Fargo & Co., hit nationally by the bank’s fake-account debacle, continues to slim down its national branch network. The bank said it would cut more than 800 locations by 2020 to get its network down to 5,000. It closed 214 branches in 2017.

Wells executives have cited consumer preference for online and mobile banking as the reason to close or sell branches.