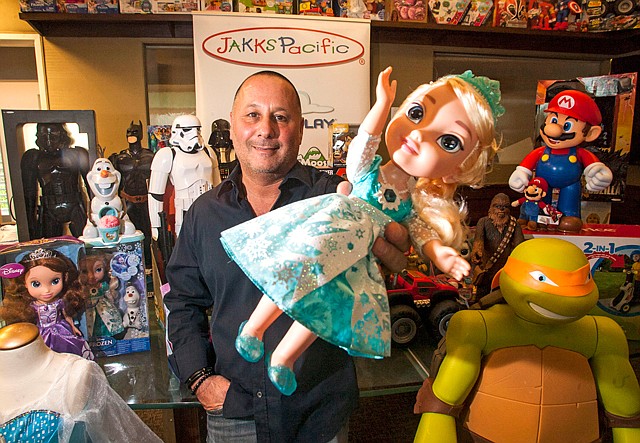 Nasdaq wasn’t playing nice when it sent out a notice to the maker of popular Harry Potter and Disney toys warning the publicly traded company it could be delisted.

The filing – along with the bankruptcy of retailer Toys R Us Inc., sliding revenues and weak brand development – led analysts to question Jakks’ future. A takeover bid that has dragged on for more than a year could further complicate the picture and signaled internal turmoil, analysts added.

Jakks explained in the SEC filing that the annual shareholder meeting was held up by its unresolved negotiations with Hong Kong-based Meisheng Cultural Co. Ltd., a subsidiary of a Chinese toymaker and children’s entertainment company trying to expand its U.S. footprint by purchasing Jakks.

Jakks promised to hold the late meeting “as soon as practicable following resolution of these discussions.” But the move signals trouble.

“This is generally quite a negative sign,” said Lawrence Harris, a professor at USC’s Marshall School of Business and a former chief economist at the SEC.

The noncompliance with Nasdaq rules suggests governance at the company is chaotic and, Harris said, it could mean Jakks doesn’t care if it’s delisted.

“If they are quite confident they are going to be taken private, they don’t care about the listing,” he said.

Meisheng already owns the largest stake in Jakks at 18 percent, ahead of the second largest shareholder − biotech billionaire and Los Angeles Times owner Patrick Soon-Shiong who own 8.5 percent, according to Jakks’ 2017 annual SEC filing, the most recent on record.

Zhao Xiaoqiang, the chairman of the China-based parent company Meisheng Cultural & Creative Corp. Ltd., has a seat on Jakks’ board. The company has long partnered with Meisheng, which has an approximately $4.8 billion market cap, enabling Jakks to extend its reach in China where 90 percent of its manufacturing is done. In 2017, for instance, Jakks signed a multiyear licensing deal to distribute more than 50 Walt Disney Co. entertainment properties in the country.

Meisheng has offered to purchase newly issued Jakks’ shares in order to increase its stake to 51 percent in a deal that would shift control of the company’s key licensing agreements – and possibly reshuffle its business model. The move would also give the Chinese company a greater portion of the $21.6 billion American toy market dominated by Mattel Inc. and Hasbro Inc.

Jakks has a market cap of approximately $45 million and a heavy debt burden. It has been tight-lipped about negotiations ahead of its planned Feb. 26 earnings report, but the takeover would help it cover its looming debts.

Chief Executive Stephen Berman told investors in October that there was no timeline as to when a deal could be reached.

Anthony Campagna, global director of fundamental research at ISS-EVA said lengthy negotiations can be a good sign that the two companies are trying to get the fit right, but the longer this drags on, the more questions are raised.

It comes as the industry as a whole has taken a hit with the Toys R Us bankruptcy and the looming threat of tariffs on Chinse products. Competitors Hasbro and El Segundo-based Mattel both reported a slip in sales as the industry research firm NPD Group Inc. said overall U.S. toy sales declined 2 percent last year.

In the tumultuous climate, Meisheng has reportedly taken advantage, offering to purchase New York-based retailer Party City Holdco Inc. last year and making overtures to other private companies, though the retailer would not comment.

Xiaoqiang was a purchasing agent for California Costume back in 2001, said Peter Woo, chief executive of California Costume Collections Inc., a subsidiary of Commerce-based Megatoys Co. Ltd. He eventually started to manufacture his own Halloween costumes, and Xiaoqiang established Meisheng Cultural Co. Ltd. in 2002.

“He is very entrepreneurial,” Woo said. “He is a doer but very humble. He wants integration for his product so that he goes from manufacturing in China to retail in the U.S.”

Meanwhile, the 23-year-old Jakks Pacific is struggling to keep up.

Jakks’ strategy has been to focus on acquiring licenses of well-recognized and evergreen brands, such as Disney’s “Frozen,” rather than creating its own products. The company has partnerships with blockbuster franchises such as Marvel and Star Wars. Last quarter, had more than 8,000 products for children ages 3 and over.

The strategy is a departure from the business model of founder Jack Friedman, who is credited with launching one of the first film-based toys with “E.T.” He founded Jakks in 1995 and died in 2010.

“Revenues have been down for six years in row,” said Linda Bolton Weiser, senior research analyst at D.A. Davidson & Co. “They don’t have any core owned brands, which have grown on a consistent basis and reliance on licensing, is iffy.”

Trying to compete with companies like Mattel is difficult, Weiser said. Valued at $5.6 billion, the toy giant can bankroll movies like its upcoming feature based on the Barbie doll brand and other content that promotes its brands.

“(Jakks has) fallen behind,” Weiser said. “The value of the company is the licensing. They don’t have any owned brands.”

“The cost of designing products is huge,” he said. “Every toy goes out of fashion every two years.”