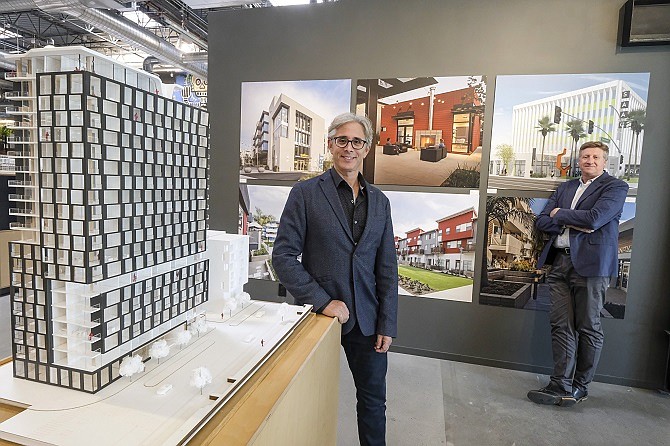 Things are looking up for Studio One Eleven — way up.

The Long Beach-based architecture firm is working on one of its most ambitious projects to date, one that will feature a 40-story, 426-foot-high tower.

It will be the tallest building in Long Beach and will serve as one of the anchors for Westside Gateway, a 1.3-million-square-foot development from Trammell Crow Residential Co.

Built in the 1960s and 1970s as a “megablock” project on land once owned by the Port of Long Beach, the original property sits at 600 W. Broadway on the edge of downtown Long Beach. The new project will feature 746 residential units, a market across six buildings and a nine-story parking structure.

Alan Pullman, founding principal at Studio One Eleven, said his firm was involved in the project early on. Pullman said the design firm’s renovation plan will reintroduce streets to make the area more walkable and “complete the block.”

While Studio One Eleven has made its mark with projects across Los Angeles, it has been especially busy in its hometown of Long Beach.

Even the company’s headquarters, located at a former Nordstrom Rack building at 245 E. 3rd St., are distinctive.

Studio One Eleven filled in a former loading dock at the space with trees and a patio. It has conference rooms and murals from local artists scattered throughout its open-concept floor plan. The firm gave up the corners of the building to restaurants.

The firm often works with local agencies such as the City of Long Beach and L.A. Metro, where it serves as a consultant for the Little Tokyo Regional Connector site.

“We are able to try things here because of our trust with partners,” Bohn said.

Pullman added that the architecture firm is more interested in creating districts than in individual projects.

Studio One Eleven has worked on a multitude of projects in Long Beach including Ocean and Cherry, a boutique hotel with 40 rooms and 56 flats and townhouses; Collage, an affordable housing project developed by Jamboree Housing Corp.; the North Long Beach Homeless Shelter and Long Beach Airport’s concession area.

The firm is also serving as a co-developer for a handful of additional projects including 4th and Linden.

A master plan development, 4th and Linden spans two blocks and 3.5 acres and features The Linden, an apartment building with 49 units at 434 E. 4th St. was built by developer Sares Regis Group.

SteelCraft Long Beach opened in 2016 and is home to eight tenants. SteelCraft Bellflower, which can house nine tenants, opened earlier this year.

“The cities were interested because they became a major draw and bring people in,” Bohn said.

Studio One Eleven sees a number of other uses for shipping containers, including as housing units.

“Our shipping container knowledge can solve some of our affordable housing issues,” Bohn said.

The advantage of doing shipping container or modular projects is that work can be done on site while units are being fabricated off-site.

The units can be put into place in two weeks, delivering what Bohn calls “an instant village.”

Pullman said more affordable housing projects and as well as projects taking advantage of Transit Oriented Communities Incentive Program incentives are on the horizon for Studio One Eleven, like its previous Zinnia Apartments project.

That project is being developed by Meta Housing Corp. in Long Beach with 72 units of affordable housing.

Studio One Eleven’s designs in L.A. include 2100 Bay Street, an adaptive reuse project in the Arts District; District La Brea; and shipping container projects in a handful of areas. 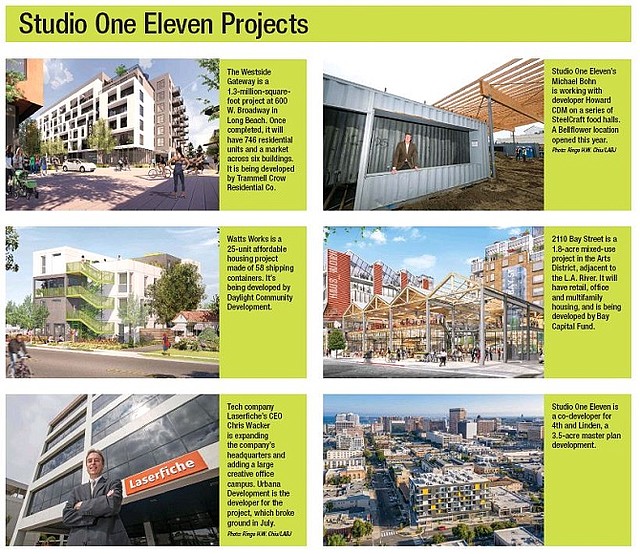