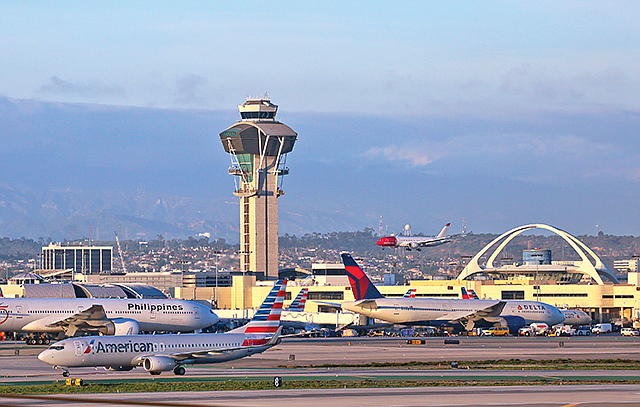 Let’s Fly Away: LAX saw a bump in its number of passengers, continuing a trend that began in January. Photo by Ringo Chiu.

July passenger traffic at Los Angeles International Airport edged up by 40,000, or 0.4%, compared to July 2018 to reach nearly 8.5 million, according to figures released by the airport’s governing authority on Aug. 27.

But the figures from Los Angeles World Airports show that international passenger traffic fell 2.5% in July, and air cargo tonnage was down significantly.

For the first seven months of this year, total passenger traffic rose by 412,000 compared to the same period last year to reach 51.5 million, an increase of 0.8 percent.

Breaking down the figures, domestic passenger traffic rose by 1.8 percent to 5.9 million in July compared to July of last year; year to date, domestic traffic was up nearly 1.7 percent to 36.4 million.

Air cargo tonnage showed a more significant drop in July, falling 6% from last year to 190,000 tons as trade tariffs from the United States and China have begun to cut into trade flows. Year to date, air cargo is off 4.3% from last year, dropping to 1.3 million tons.

At Ontario, air passenger traffic was up 10.4% this July compared to last, reaching 495,000, according to figures from Ontario International Airport Authority released Aug. 14. Traffic was up 7% for the first seven months of this year compared to last year, topping 3 million.

But at Long Beach Airport, traffic was down once again amid continuing fallout from dominant carrier JetBlue Airways Corp.’s decision last year to scale back operations there. Air passenger counts at Long Beach fell 10.8% in July compared to July of last year, falling to 319,000, according to figures released Aug. 22 by the city-run airport authority. For the first seven months of 2019, passenger counts fell nearly 15% from the same period last year to just over 2 million.