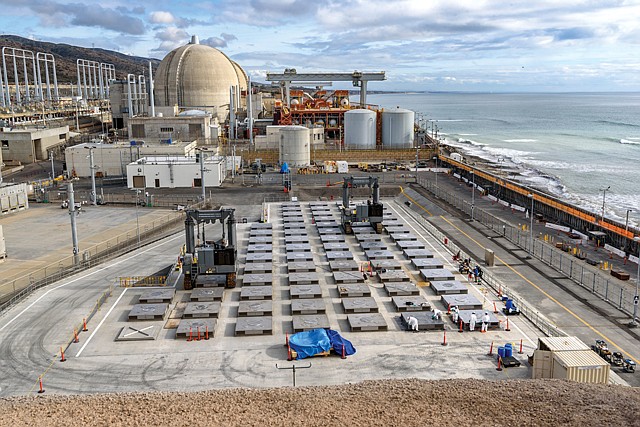 Call it the ultimate NIMBY conundrum.

Southern California Edison, the utility subsidiary of Rosemead-based Edison International, has been trying to figure out what to do with 3.6 million pounds of nuclear waste at the shuttered San Onofre Nuclear Generating Station in northern San Diego County.

No one wants the waste to remain onsite. Indeed, two years ago, Southern California Edison reached agreement with an anti-nuclear group and nearby residents to make every “commercially reasonable effort” to remove the waste from the facility.

Trouble is, there’s no legally permitted facility to accept the waste. A proposed nuclear waste repository at Nevada’s Yucca Mountain has been stalled by political opposition for decades and licensing approvals for private interim storage sites in New Mexico and Texas have not moved substantially since applications were received three years ago.

It’s not just an environmental issue. It’s a key piece in Southern California Edison’s plans to decommission the power plant. The $4.4 billion project — with costs to be borne by ratepayers — is expected to take 10 years.

To try to break the logjam, Southern California Edison in June hired Idaho Falls, Idaho-based environmental and engineering consulting firm North Wind Inc. — a subsidiary of Anchorage, Alaska-based Cook Inlet Region Inc. — to come up with other sites for interim storage of the nuclear waste and to try to hammer out “stakeholder agreements” so the waste can be moved from San Onofre.

“While it is true that there is no licensed facility currently available,

there is much work that can be done to support the development of other alternatives for a licensed facility,” John Dobken, spokesman for Southern California Edison at the San Onofre Nuclear Generating Station, said in an email. “To our knowledge, no other commercial nuclear site in the U.S. has taken the initiative to develop a strategic plan to relocate their spent nuclear fuel.”

North Wind said in an emailed statement that it will be providing Southern California Edison with analyses and recommendations that are commercially reasonable to move fuel off-site. This includes looking at safety, technical feasibility, costs, utility customer interests and the likelihood of a successful licensing outcome.

Spent nuclear fuel is the term for nuclear rods that no longer have enough fuel to sustain a nuclear reaction; the remaining nuclear fuel in each rod will continue to give off radiation for hundreds, if not thousands, of years.

Spent nuclear fuel started accumulating at San Onofre when it opened in 1967. The prevailing practice at the time was to store spent fuel rods on site, which continues to this day.

It wasn’t until the 1980s, in the aftermath of the Three Mile Island nuclear incident, that attention was focused on the spent rods accumulating at nuclear plants across the nation. In 1987, Congress designated the nation’s first underground nuclear waste storage facility for Yucca Mountain, about 80 miles northwest of Las Vegas.

But the plan met with opposition from local Native American tribes and residents concerned about possible nuclear contamination of groundwater or accidental radiation releases.

Two private sector proposals emerged in 2016 and 2017 for interim nuclear waste storage sites along the New Mexico-Texas border: one in Lea County, N.M., and the other in Andrews County, Texas. According to the U.S. Nuclear Regulatory Commission website, both sites are “under review.”

With no licensed facility to take the spent fuel, Southern California Edison won approval from the California Coastal Commission to store the nuclear waste in a facility near a seawall at the San Onofre facility.

The utility also decided to remove the fuel rods from their encasement in water and put them in dry canisters. That process has continued for several years, with an interruption of nine months last fall after a canister got wedged as it was being lowered.

But the seaside facility was opposed by local residents, and Citizens Oversight, an anti-nuclear group; they wanted the nuclear waste removed from the site altogether. They sued, and in 2017 reached agreement with Southern California Edison in which the utility would take steps to relocate the waste.

“SCE has not made sufficient progress,” Lutz said by email. “They provide quarterly reports of their progress to us. In every report, they say the same thing. … The last line is ‘Updates will be provided as progress is made on the Strategic Plan.’ No progress has apparently been made.”

No solution in sight

Meshkati said Southern California Edison should consider moving the waste onto land it leases at the U.S. Navy’s Marine Corps base at Camp Pendleton.But Southern California Edison’s San Onofre spokesman Dobson said that even moving the waste a mile or so inland would require a license from the Nuclear Regulatory Commission. “And more importantly, the U.S. Navy doesn’t want it there.” The utility’s lease on that parcel ends in 2023.

CORRECTION: An earlier version of this story, which ran in the Aug. 19 issue, mischaracterized an incident last year at the San Onofre Nuclear Generating Station involving a canister containing spent nuclear fuel. The canister became improperly wedged as it was being lowered into a dry storage containment facility. The story also misstated who would be responsible for the cost of decommissioning San Onofre. Ratepayers will bear the cost.