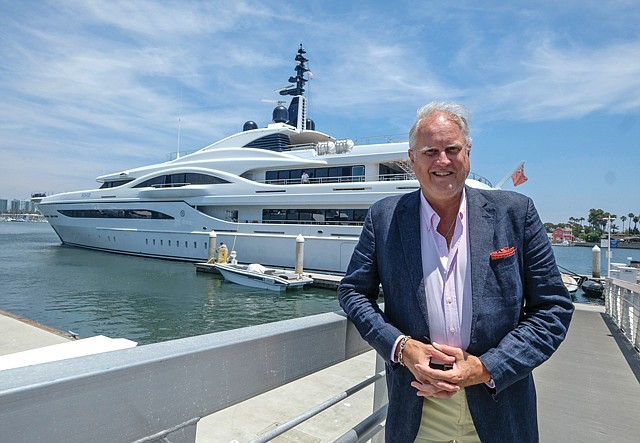 But for many executives looking to mix business with pleasure yachts, it’s more about fun and function than “wow” factor. Entertaining clients on the water, they say, offers an unmatched experience.

“You do business with people that you like, and when you take all of the pressures of business away, you can be yourself and get to know people,” said Gary Mozer, principal and founder of Century City-based George Smith Partners Inc. real estate banking firm.

Mozer said one of his top lenders from the East Coast is a boating enthusiast, so on one of his trips to Los Angeles, Mozer, a competitive sailor who also owns a motorboat, took him out for a sail. “It was three hours … of not really talking shop, just getting to know each other. And I know next time there’s a problem, he’s going to remember me.”

With 3,815 slips, Marina del Rey boasts the world’s second-largest harbor behind Dubai Marina in the United Arab Emirates, according to the Los Angeles County Department of Beaches and Harbors. Most Marina del Rey boaters take smaller craft on quick sails to nearby harbors in Long Beach, Newport Beach and Catalina Island.

While Andelman is always in the market for more business-driven customers, he usually draws the line when it comes to self-described influencers who say they can promote OnBoat to their followers. He believes young followers might be influenced to buy a new shade of lipstick, but probably not to lease a mega-yacht.

“I get two to five emails a week asking me for a free boat,” he said. “It’s not worth it.”

Some local business leaders have figured out ways to meld their love of boating and their ownership of yachts into creative opportunities.

British billionaire heiress Alice Bamford and her partner Ann Eysenring are owners of One Gun Ranch, a biodynamic farm in Malibu that supplies organic vegetables and fruits to various Wolfgang Puck Worldwide Inc. and Nobu Restaurants locations. The business also includes the Ranch at the Pier shop at Malibu’s Surfrider Beach, which features various sustainable products including T-shirts and dog bowls. Eysenring, a Southern California native and lifelong boater, said the pair are actively expanding their enterprise to offer more boating experiences.

They own several boats, but the most visible is the yacht Surfrider, which is kept in Marina del Rey and is owned by Eysenring.

While the couple and their family enjoy the yacht and other boats for personal use, Eysenring, who has another career as a real estate adviser, described a boat ride as the perfect housewarming gift for a client after the stressful process of buying a new home.

“It goes hand in hand with my real estate business,” she said. “It’s fun.”

The 106-foot Surfrider yacht also is available for rent at $12,500 a day, not including fuel or food. However, the yacht, which she describes as perfect for family travel, includes a full crew, a chef, five cabins, four crew cabins and watersport toys such as an inflatable Zodiac boat and equipment for snorkeling and diving.

Santa Monica-based GumGum Inc., an artificial intelligence company, has used a yacht in Marina del Rey as well as other national and international harbors for its 3-year-old “GumGum Brings Cannes to You” program, offering its own version of the annual Cannes Lions International Festival of Creativity for advertising and creative communications professionals where such companies do their networking on yachts in the French Riviera.

GumGum went to the Cannes Lions in 2016, but “we decided it’s only a sliver of people in the industry who get to go to Cannes; it’s a very expensive trip,” said Som Puangladda, GumGum’s vice president of global marketing.

In 2017, GumGum held its first yacht parties in Los Angeles, Chicago and London, and has since expanded to more Cannes and French-themed events to locations such as Dallas, Minneapolis and Sydney. The affairs include such social-media-friendly accoutrements as photo booths, contests requiring plenty of hashtags and branded gifts. The events also include off-the-water offerings such as cooking classes and dinner parties.

Puangladda said annual attendance has grown from 280 in all cities to 780 in 2019. “We’ve built a whole interactive website about this program, the branding keeps elevating every year,” Puangladda said. “Last year’s yacht was able to bring us 24 times ROI in the last 12 months.”

The marina has seen its share of so-called mega-yachts, which start at 164 feet long. But the harbor department said the water is too shallow to make it a frequent base for the world’s biggest yachts.

Marina del Rey has welcomed the 332-foot, 400-ton Attessa IV, owned by Montana-based industrialist Dennis Washington, and more recently, the 270-foot Honor, which is currently listed for sale at about $54 million. But those vessels are exceptions.

Rolf Smith, sales broker for Northrop & Johnson, a global yacht broker with offices in locations including Beverly Hills and Newport Beach, said it doesn’t take a mega-yacht to conjure the magic. “There’s something mystical about yachts,” he said. “When people get on board, they decompress in a different way.”

Smith said many yacht owners bring friends or professional associates on board for a drink or to watch the sunset without going anywhere at all. Unlike entertaining clients at a bar or restaurant, when socializing on a yacht “they are captive, but in a good way.”