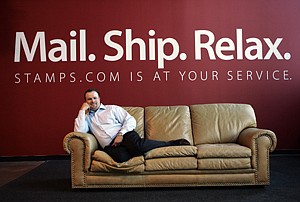 El Segundo-based online postage startup Stamps.com Inc. ended an exclusive partnership with the U.S. Postal Service in February and expanded its service to work with multiple other parcel carriers.

But in its first quarterly earnings report since terminating the USPS agreement, Stamps.com reported a 69% decline in profits, which fell to $14 million from $45.5 million during the same period last year.

Stamps.com Chief Executive Kenneth McBride said in a statement the firm’s results reflected the change in business since its split with USPS, noting “our financial results for the second quarter were in line with our expectations in light of our new strategic direction.”

McBride added that "during the second quarter, we continued to make progress on our efforts to evolve our strategy to more fully embrace a global multicarrier business model."

The company reported a 1% decrease in total revenue year over year in the second quarter, which dipped to $138.8 million. Stamps.com’s market cap was just over $1 billion on August 8.

Stamps.com operates four subsidiaries, all in the shipping and logistics industry, including MetaPack, which it acquired for $230 million in July 2018.

An earlier version of this story misstated Stamps.com's market cap. It is just over $1 billion.