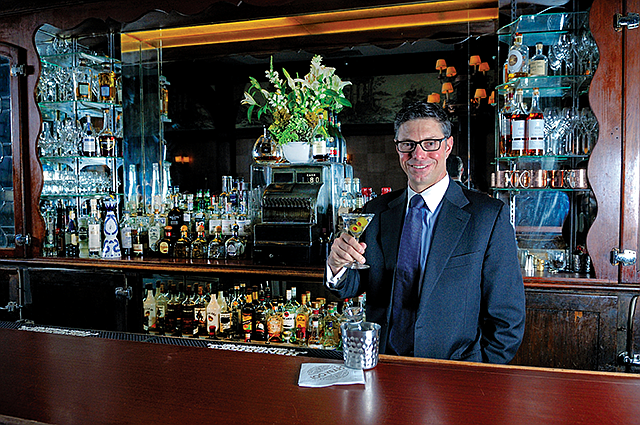 Most Musso patrons have heard the star stories. Regular customer Charlie Chaplin and colleagues would stage horse races down Hollywood Boulevard to the restaurant, and the loser would pay for lunch. Chaplin and companion always sat in the booth by the front window, so he could keep an eye on their horses tied outside. Steve McQueen had a favorite seat at the counter. Patrons included Frank Sinatra, Alfred Hitchcock, Elizabeth Taylor, Johnny Depp and the Rolling Stones.

In 1927, two Italian immigrants, Joseph Carissimi and John Mosso (similar name, no connection) bought the business and incorporated at the end of that year. The business partners moved to the current address in 1934 and built a bar to capitalize on the post-Prohibition frenzy for cocktails, including Musso’s now-famous martini. They added an additional dining room in 1955, where that original bar has been moved.

Today, Musso & Frank is owned and operated by the families of Mosso’s three granddaughters: Steve and Anne Jones, Richard and Kristen Kohlmeyer, John and Cathy Echeverria, and their son, Mark.

Mark Echeverria was asked by his father to take the reins in 2009, the year the Mosso family bought out the Carissimis. At the time, Mark was far from Hollywood — running fly fishing lodges in Alaska, training to be a bush pilot in the summer and managing a ski resort in Lake Tahoe.

Following the 2008 economic recession, Echeverria said he consulted the company’s corporate minutes and stock books dating back to 1928 to get the then-ailing establishment back on sound financial ground.

“We have a saying that nothing moves fast at Musso’s, and our decision-making process is a prime example of that,” Echeverria said. “We scrutinize our analytics to make well-informed decisions.”

Echeverria displayed a 1966 menu where the server had kept a tally of the Saturday night product mix — that is, how many of each dish got ordered — with a red pen. Now, records are kept via computer, but the practice remains the same: Keep giving the customers what they want, by the numbers.

Echeverria said the restaurant occasionally adds a new dish, but it has to be something the European-style restaurant might have served in the 1930s. The process is so seamless some customers begin believing the new menu offering originated just after Prohibition.

He added that Musso’s traditional fine-dining experience remains as important as traditional cuisine. In his office he may wear jeans, but when he’s greeting customers in the restaurant’s red-leather booths, he wears a suit. “The restaurant deserves that those in charge should be in suits, and our customers deserve having our servers in tuxedoes and red Eton jackets,” he said. “(We) meet that certain standard.”