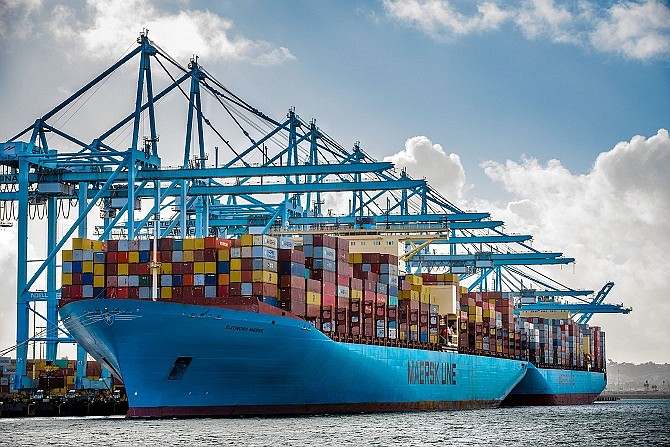 APM Terminals at the Port of Los Angeles

Hundreds of dockworkers booed as the Los Angeles Board of Harbor Commissioners announced Tuesday morning to postpone a vote for 30 days on automation at the West Coast's largest terminal at the request of Los Angeles Mayor Eric Garcetti.

Los Angeles terminal operator APM Terminals, a subsidiary of Danish shipping and oil conglomerate A.P. Moeller - Maersk, wants to roll out an automated freight vehicle program over three years. The move could eliminate hundreds of high-paying jobs and it has touched off a sharp reaction from union leaders who see the move as a larger effort to diminish the workforce at the port. Two other terminals in the San Pedro Bay port complex are also automated, but the union sees new smart technology coming online as more threatening than previous iterations.

Ray Familathe, president of the ILWU Local 13 said the dockworkers that packed a San Pedro meeting hall were frustrated with the vote.

"They want to see the permit denied," he said.

Garcetti has been holding talks between the two parties to avert any labor slowdowns. APM would not disclose how much the plan was cost but has pitched the move as a way to help it meet strict state clean air standards.

Tom Boyd, a spokesperson for APM Terminal, said in a statement that they "look forward to working expeditiously through the process."

The commission has postponed a vote once before on the permit, which could give APM Terminals permission to move forward with their automation plans. Last month, Garcetti asked for a delay as he formed a task force and began to facilitate talks among the parties.